Apologies for the quiet start to the year. Not that I presume anyone's on tenterhooks for the latest Ben Mitchell bon mot, but still. On top of the unending goddamn death parade January was when it comes to people I love in the worlds of film and music, closer to home there has been a peculiar glut of family hardship and tragedy that has been very difficult to just grin and wade through.
Tempted as I've sometimes been to use this blog as a repository for personal woes, I'll once more abstain and keep focused on the positives. Mainly that there is an abundance of love and support in my life that I'm beyond grateful for, that I have a job I've been especially enjoying of late and that the good news for 2016 is starting to trickle in. On the latter front I should have some updates soon, but in the meantime here's some Skwigly stuff to get caught up on: 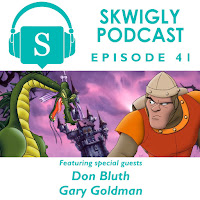 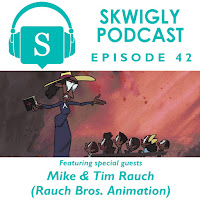 We have two new podcasts for January, the first in which Steve meets Disney'n'Dragon's Lair veterans Don Bluth and Gary Goldman, the second featuring Mike and Tim Rauch of Rauch Bros. Animation who, among other work, produced many of the Storycorps animated shorts. For those not familiar with Storycorps, they're essentially a collection of animated oral histories/documentaries, making great use of industry talent such as Jim Smith, Bill Wray and Stephen deStefano (all of whom I've been a huge fan of since the days of their Ren and Stimpy tenure). 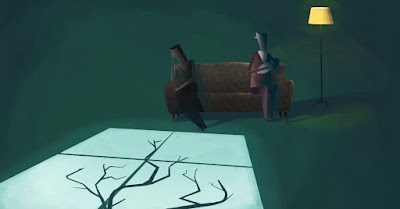 On the subject of animated docs, George Sander-Jackson (with whom we previously spoke in episode 10 of the podcast) recently corralled a group of some fantastic animators to direct short animated segments detailing stories of postnatal mental illness for Animated Minds, the aim being to spread awareness to families facing similar issues as well as healthcare professionals. As well as being gorgeously rendered they are also fascinating and tremendously informative so I recommend you give them all a watch and learn more about how they came together from the directors themselves:
Animated Minds: Stories of Postnatal Depression

Elsewhere on the site I recently spoke with The Secret Life of Pets director Chris Renaud (of Despicable Me and Minions fame) in anticipation of the film's Summer release, learned a bit about the animated revival of a 'lost episode' of Dad's Army from some pals who worked on it, interviewed New York-based Australian animator Elliot Cowan on his indie feature The Stressful Adventures of Boxhead and Roundhead (which will screen here in the UK February 13th at Animex) and put up two new Lightbox episodes. The first features my chat with Tomm Moore at the recent KLIK! festival discussing Song of the Sea and his role in Kahlil Gibran's The Prophet, the second is a somewhat old (though evergreen) interview Steve did with Mackinnon and Saunders (the fabrication team who created the puppets for Corpse Bride, Frankenweenie, Fantastic Mr. Fox and many more), who have an exhibition of their work up at the Waterside Arts Centre for the rest of this month. Give 'em both a watch below:

Other highlights from our contributing writers include a breakdown of this year's VFX Oscar hopefuls by Nathan Wilkes, Stephen Cavalier celebrates Chris Shepherd's Dad's Dead (one of my personal favourites, recently remastered in HD) as part of his 100 Greatest Animated Shorts series, Laura-Beth interviews Sheridan grad Edlyn Capulong on her wonderfully weird short Lucy and the Limbs and Julia Young dissects Frédéric Doazan's brutal and brilliant satirical piece Supervenus, which was recently given an official online release. Definitely give this one a watch (maybe not while having your dinner) - it's sort of Terry Gilliam-meets-Embarrassing Bodies-meets-Saw:
That'll do for now. Keep 'em peeled in the coming weeks for some exciting announcements and the like.
Posted by Struwwelpeter at 06:40 No comments: