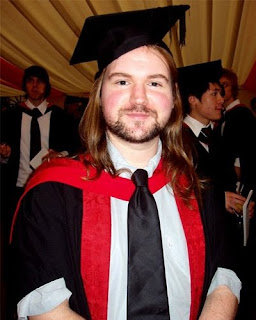 Thought I'd show some photographic evidence that all this zombie duck cartoon nonsense actually had some legitimate application when it came to getting me an MA.
I'm highly edumacated! Along with several others who helped out here and there with 'House Guest', so thanks again in photographic order to Hanna Merilainen, Verity Ross-Smith (script supervisors), Helen Shaw, Cari Merryman, Vibeke Cleaverly (clean-up/colouring assistants) and of course my family for their amazing support. 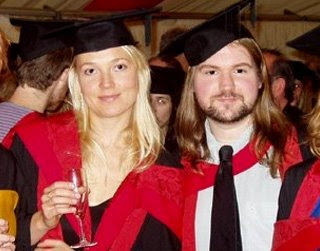 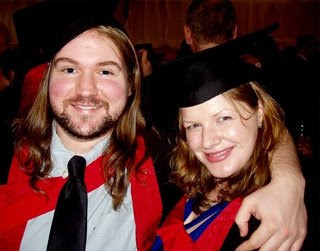 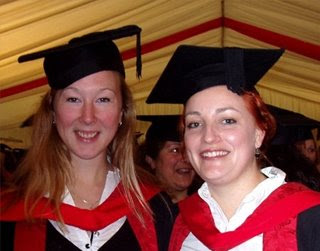 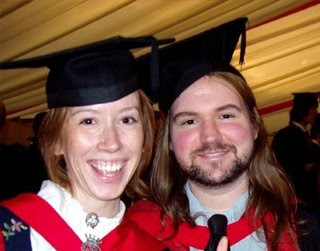 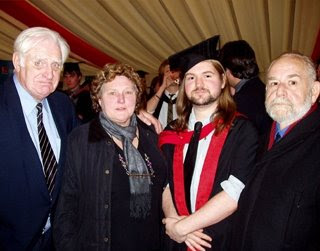 Posted by Struwwelpeter at 06:04 No comments:

'I Castelli Animati', an Italian animation festival, has picked up 'House Guest' and will screen it as part of their International Showcase on November 27th! So, if you've been looking for an excuse to visit that delightful city, why, this should be the clincher.
In truth I'd be there myself except, naturally, it falls on the day of my graduation. Not only would it have been amazing to get over to Italy, but the whole festival looks like it'll be a blast. Check out what's on offer at their website if you don't believe me.

On a related note, my MA coursemate Michael Rokes's film 'Bertha & Bruno' was recently shown at this year's 'Flip Animation Festival' in Wolverhampton, alongside such greats as Smith & Foulkes and even Bill Plympton! Having had a front row seat to all the blood, sweat and bloody, sweaty tears that went into the film, I have to say it undoubtedly deserves all the success and accolades it will hopefully garner. Plus, my name's on the credits for composing the score and I need all the exposure I can get.
Ah, backhanded, self-serving compliments. They make the world brighter, don't they?
Posted by Struwwelpeter at 13:37 No comments:

Rather than let the idea evaporate in the wind (as ideas are wont to do), I'm making a concerted effort to find time to make 'House Guest: The Graphic Novel' a reality. Indie publishing companies like Cafepress and Lulu would make distribution a breeze, and I can say that from experience. I've sold albums, merchandise and books through them in the past at no cost, and if the product is good, people do buy it. Of course, if the product is crap, then not so much. Hopefully the 'House Guest' book will fall into the former category.
The bulk of the book will, naturally, be the adaptation of the film itself. I've broken it down in an almost-indecipherable way: 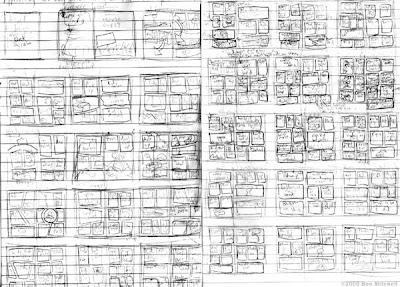 Believe it or not, those have proved very dependable in terms of laying out the comic. It comes to about 64 pages though, which in my opinion is a little skimpy. I think to graduate it from just a 'comic' to a 'graphic novel' it'd need to be 100 pages, minimum.
So I'm not quite sure what to do next. Do I have enough material to pad out 40 pages? I could possibly collect some roughs and concept art, or maybe even include another story ('Ground Running', being largely a visual film, would translate very easily into a comic). I guess time will tell.
Posted by Struwwelpeter at 10:52 No comments:

So my baby doesn't get too smug...

After the encouraging news of the 'Ground Running' festival premiere the other week, I'd been pondering as to whether or not 'House Guest' would ever get screened, being such a different type of film. It was nice to see it responded to positively at the bar screening last month, so it seems a fair enough assumption that it won't send the average festivalgoer fleeing up the aisles in revulsion and disgust.
With that in mind, it was a well-timed piece of good news to hear recently that on November 30th 'House Guest' will get its UK festival debut during Nottingham's 'Bang! Short Film Festival'. Yahoo!

This festival has in the past shown films by my MA coursemates Miho Matsuda (including her super-creepy graduate film 'Dancers of the Stolen Heart') and Maria Gracia Bisso.
Check out their website and, if it's your thing, go along and give my flick a look see on the big screen. Well, I'm assuming it'll be a big screen. Big-ish at least.
Posted by Struwwelpeter at 12:56 No comments: