Don't ask me why

Outside of work my time is primarily focused on legal documentation relating to the ever-snowballing Project Group-Hug, so there's not much by way of new gossip, I'm afeared. Instead here's some more of my musically musical music. This song is ELEVEN (gawd) years old, from my presently out-of-print 2004 album Rapeseed. Evidently I sought title inspiration from my kitchen cabinet back then. I've cleaned/spruced it up a touch to make it a little easier on the ears. It was originally intended as a theme song to an animated sitcom I wanted to make at the time. That plan went out of the window the moment I actually started studying animation but not that long ago I unearthed some scripts and a sort of amateur series bible I'd put together. Here are some sample storylines:

What wonderment could've been, eh? I guess the itch to do something sitcom-ey was ultimately scratched by my thesis film House Guest.
I also note that this month marks the 20th anniversary of Garbage's eponymous debut LP, which the band are celebrating in style. They were always a big inspiration on the production/composition side of things so I have a lot of love for them. To mark the occasion I've dug out my patchy attempt at a cover of the deep track 'A Stroke of Luck' during a live show from about four years back. Loving tribute or hideous caterwauling, I'll leave you to draw your own conclusions:
Posted by Struwwelpeter at 07:36 No comments: 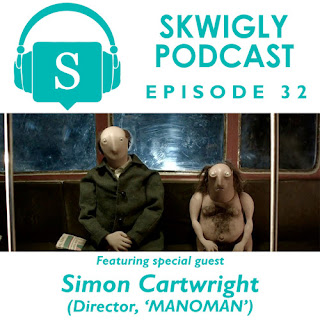 In the latest episode of the Skwigly Animation Podcast we go primal with recent NFTS graduate Simon Cartwright, whose short MANOMAN is a joyously dark, twisted (and to some of us, curiously relatable) marriage of animation and live-action puppetry. Steve managed to get some time to interview Simon at EIFF this year and a darn enjoyable listen it is too. Also joining the podcast this episode is puppet specialist, technical instructor and animation author Mary Murphy, discussing the Bristol Festival of Puppetry (whose 2015 edition kicks off this week) and her exclusive workshop Stop Motion on a Shoestring.
Also discussed in this episode are the latest developments from Skwigly’s ongoing series of animation screenings This Is Not A Cartoon, sex education via animation as well as the pleasing success of previous guest Signe Baumane‘s independent feature film Rocks In My Pockets and its recent screening as part of the Bechdel Test Fest.
Stream the latest episode above or direct download here.
Posted by Struwwelpeter at 09:50 No comments: 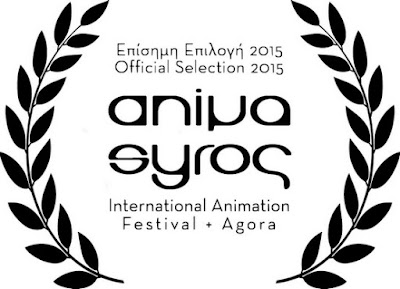 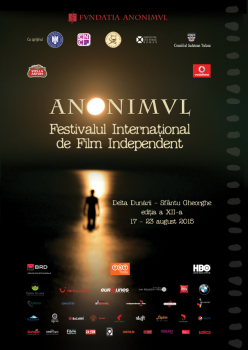 Festival update with specifics on the premiere of my new film at the Anonimul International Film Festival, based in the idyllic-looking Danube Delta. The film will be part of the Competition 4 programme that will screen this Thursday (20th) at 5:45pm at the Green Village Resort, followed by an outdoor screening (I think) at 11:45pm. It will screen again at Green Village the following day (Friday 21st) at 3:30pm. So for those of you lucky enough to be in attendance, please do check it out!
Posted by Struwwelpeter at 12:27 No comments:

While I'm still keen to steer the musically-inclined amongst you toward my latest album The Birdcage with the toothy, glistening grin of a huckster shilling snake-oil, this week I dug out an older track from way back in '07 and gave it a bit of spit'n'polish. This is from an album of electro-cheese I wrote for some friends who helped with the production. At the time they were popping up as DJ troupe The Labrys Trio playing the various gay bars of New South Wales and wanted some original material to throw into their sets. The overall album, released as The Labrys Quartet (I was their 'honorary fourth lesbian') came out a bit patchy if I'm honest but there were enough nice bits to justify an eventual reissue down the line. This one I quite like for being so uncharacteristically DnB compared to most of my other stuff. One big lament is the choice of title/lyrics - had I but known how hideously overplayed the phrase 'Keep Calm and Carry On' would have become I'd have gone another way. Hindsight, 20/20, etc. As she often did with the early Struwwelpeter albums, my old pal Alison weighed in on the drum programming side of things with this one. Listen below or keep for keepsies, 'cause I'm kindness personified. On the subject of old, shoutey songs I also recently threw up a remastered version of the very first track from the very first Struwwelpeter LP, originally recorded way back in 2003. Juxtaposed against the general mellowness of The Birdcage it seems I had a lot more Red Bull in me back then. I'm off to spend a mellow weekend away with no distractions save for the new Palahniuk, but to leave you all with a literature recommendation of my own (not Throat, for a change) have a read of my review of experimental filmmaker Steven Woloshen's Scratch, Crackle and Pop, a very enjoyable read that made an area of filmmaking I had little frame of reference for very accessible and appealing: 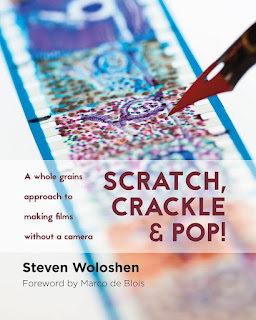 Posted by Struwwelpeter at 17:42 No comments: 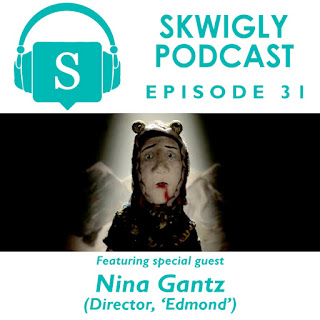 This week sees the relaunch of the Skwigly Podcast after 3+ years and 30 episodes. The new version will see myself, Steve and other members of the Skwigly team bringing you more regular podcast content in a shorter, more streamlined form.

For our first episode of Skwigly Podcast 2.0 (episode 31 overall) we are delighted to feature an interview with recent NFTS graduate Nina Gantz, whose short Edmond has already proved popular and won multiple awards including both the Canal + Creative Aid Award and the Graduation Film Jury Award at Annecy 2015!
Stream the latest episode below or direct download here.
To catch up on the podcast so far be sure to visit the Podcasts section of the site and, so as not to miss out on any future episodes, you can subscribe on iTunes!
Also up on the site is a new interview with director Chris Shepherd (the talented fellow behind Dad's Dead, Who I Am and What I Want and The Ringer) discussing his new rubberhose-inspired animated promo The Concept for Lambchop offshoot HecTA. To learn more about Chris's prior work you can also have a listen back to our 2013 interview in episode 15 of the podcast:
Finally I want to say a special thanks to those of you who've picked up Throat: Nobody's Waiting since it came out last week. Early feedback has been very positive and I'm glad some kindhearted folks have stuck with the story to the bitter end, so to speak. Y'all are still lovely indeed.

Posted by Struwwelpeter at 16:36 No comments: 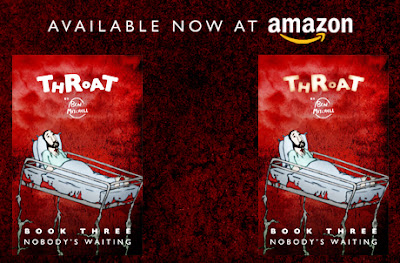 To follow on from Monday's post, Throat: Nobody's Waiting is now listed on Amazon for US and European bookfolk to purchase. Here's a breakdown of each version/territory:

No Canadian listing as of yet but for the benefit of my fellow Canucks I'll keep my peepers a-peepin' and let you know when/if it shows up. 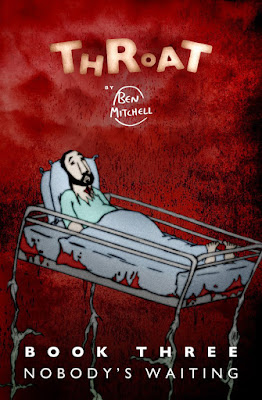 The latest item on my 2015 'to do' list has been scratched off today with the release of the third and final installment of the serialised Throat editions. In the same somewhat unprecedented manner as The Birdcage coming out on time earlier this year, by strange miracle I managed to live up to my promise to myself that the book would be out this very day. As with books 1 and 2, this installment has some extra content from the original 'complete story' release. This time around it takes the form of a new interview looking back at how the story came together, conducted last month by the ever-wonderful Laura-Beth.
The retail print run is fairly limited but eagle-eyed US dwellers may find a copy if their local comics vendor has particularly fine taste. For everyone else's benefit I'm assured an Amazon listing for the standard and full-colour editions will be up by the end of the week, so will bung up some links when I have 'em. 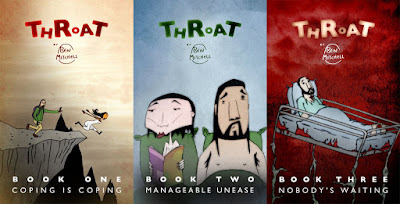 And so draws a line under the saga of Throat. Thanks to those who've supported it and helped it come together in the first place, y'all are lovely indeed!
Posted by Struwwelpeter at 08:05 No comments: