As I froghop from Animafest in Zagreb to Annecy (in, y'know, Annecy), here are a couple of interviews worth sharing. 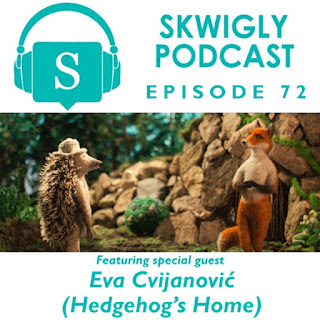 In episode 72 of the podcast we welcome Eva Cvijanović, director of the National Film Board of Canada/Bonobostudio short Hedgehog’s Home that, on top of playing in the Annecy competition this week (with Anima Mundi to follow in July), recently picked up the Animafest Audience award, understandably so as it was easily the most enthusiastically-received film that played at the fest).
A graduate of Concordia University, Eva’s independent film work includes 2010’s Once Upon a Many Time and 2013’s Seasick. Her work with the NFB began with her participation in the seventh edition of the Hothouse apprenticeship scheme, for which she made The Kiss (2011). Since then she has created the micro-short Survival of the Fittest (originally produced in 2014 and released this year as part of the NFB’s Naked Island series) with Hedgehog’s Home, a stop-motion adaptation of Branko Ćopić’s classic children’s book, being her most ambitious film project to date.
Also discussed in this episode: Annecy anticipation, the quasi-controversy of Red Shoes, Emoji Movie emoting and the gloriously dubious VFX of Twin Peaks. Stream above or direct download here. 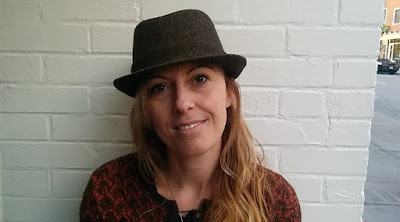 I've also today put up a written interview with the film's co-producer Jelena Popović about her involvement in the films as well as some other recent projects including Chintis Lundgren's Manivald, Sheldon Cohen’s My Heart Attack, Theo Ushev’s Blood Manifesto and the recent NFB micro-shorts series Naked Island. She's a tremendous person doing tremendous things so please do take the time to check out the piece and look into some of what she's been up to, you'll be glad you did:
Producing Animation: Jelena Popović
Right, off to get in some lake time before press duties commence. Happy heatwave, everyone!
Posted by Struwwelpeter at 13:52 No comments:

In a couple of days the 2017 edition of Animafest Zagreb will be kicking off. There's a brilliant line-up of films including recent favourites Lovestreams, Tough, Le Clitoris, Hi Stranger, Hedgehog's Home, I Like Girls, The Absence of Eddy Table, Love in Idleness and Analysis Paralysis, not to mention a quintet of Rosto films as well as all manner of special events and presentations as previewed in this here press release:
Animafest Zagreb 2017 presents rich programme and distinguished guests
While 'distinguished' in my case can only reasonably refer to my hair going a bit Paulie-Walnuts-grey at the sides these days, the eagle-eyed of you will see that my name does indeed pop up. While mainly helping out as part of the features jury panel I'll be involved in a couple of events, so if any of you lot will be finding yourselves at the fest please do swing by:

ANIMAFEST PRO: BOOK PRESENTATION
Alongside Maureen Furniss (scribe of one of my favourite cultural studies The Animation Bible and the more recent A New History of Animation) and graphic novelist Simon Bogojević Narath (Saturn's Circle) I'll be discussing my recent book Independent Animation: Developing, Producing and Distributing Your Animated Films. The presentation is free to attend and takes place at the Medijateka Francuskog Instituta on Wednesday June 7th, 6pm.
ANIMAFEST PRO: MAKING INDEPENDENT ANIMATION NOW
I'll be introducing and moderating a panel discussion on contemporary independent animation practices with Veljko Popović, Marta Pajek, Dahee Jeong, Marko Tadić. This one's also free and will be at KIC Kulturno on Friday June 9th, 10:30am.
Hope to see some of you there!

Posted by Struwwelpeter at 12:02 No comments:

What's blue-ish, animationey and looking more swish than ever?
Why, it's our fancy new Skwigly relaunch!

Skwigly has a new look! Be sure to check out our latest animation coverage and our more user-friendly interface at https://t.co/rn56RaparE pic.twitter.com/NmDLipfI7i
— Skwigly Animation (@skwigly) June 2, 2017

Massive kudos to the ever-brilliant Aaron Wood for the fantastic overhaul of the site. Why, it's the perfect excuse to get all caught up on our Skwigly-doings! Including:
Episode 71 of the Skwigly Animation Podcast, where Steve and I discuss the next Manchester Animation Festival, Klementhro's divisive online reception and the enticing visuals of Cuphead. As always it is but mere blathering pre-amble to our brilliant guest, who in this episode happens to be Father and Daughter director Michaël Dudok de Wit chatting about his superb, 2D animated (mostly) feature The Red Turtle, out now in UK cinemas. Stream below (or download):
Also up now is episode 3 of Intimate Animation: Season 2, in which Laura-Beth and I ponder Annecy's upcoming Tribute to Erotica, reminisce about melted shoes and we welcome Canadian comic artist/filmmaker Diane Obomsawin. Diane's recent film J'aime les filles (I Like Girls) is a somewhat abridged adaptation of her graphic novel that visually recounts stories of various women’s affection for other women. The film won the Grand Prize for Independent Animated Short at last year's OIAF and will be screening as part of the Official Selection for Annecy 2017 later this month, as well as at Animafest Zagreb next week. Again, stream below (or, again, download):
Check it all out at http://www.skwigly.co.uk - bookmark it, share it, tell friends and foe alike!
Posted by Struwwelpeter at 10:33 No comments: