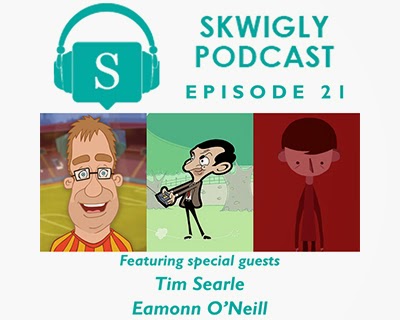 This week on Skwigly we have a nice, stodgy clump of new content to rub into your ears and eyes. Firstly there's a slightly overdue new podcast featuring special guest Tim Searle, currently working on Mr. Bean whose other credits include Warren United, 2DTV, I Am Not An Animal and Have I Got News For You. Also on the podcast Laura-Beth chats to up-and-comer (well, to an extent he's both upped and come, but I'm sure there's plenty more upping and coming ahead for the fellow) Eamonn o'Neill on his work including I'm Fine Thanks and Left, while Steve and I keep things topical by giving The Return of Jafar the dressing down it deserves.

I'm also happy to say that this week sees the launch of a new video strand which we'll be hosting on our thus-far-underused YouTube channel. Dubbed Lightbox, it will serve as a series of mini-documentaries on all things animation. As with the site itself, this will span TV shows, interviews, major feature films, independent projects, behind-the-scenes goodness, all that jazz.
The first few weeks will mainly consist of videos we've already showcased in some way or other, after which we'll be keeping them as their own separate thing, with our Vimeo channel reserved for longer-form content like documentaries and such.
On a not-entirely-unrelated note, the Bristol Comic Expo panel events I participated in over the weekend were a success, so thanks again to Dani Abram for the invite and getting it all sorted. We managed to get it recorded so there's a good chance some of it will materialise in some form or other soon.
Posted by Struwwelpeter at 09:29 No comments:

It's been another dry spell on the blogging front. As predicted a while back, things have been busier than ever (with some extra, unanticipated time drains thrown in) but I'm cautiously optimistic life will return to relative normalcy late June/July. In the meantime here's a quick note to say I've been invited to participate in two animation-themed panels at this year's Bristol Comic Expo. They start at 1pm this Saturday (the 10th), the first one is on working in animation which I'll be on the panel for, the second's on Bristol animation studios which I'll be presenting. Lots of other talented folk will be there, including animation stalwarts Rumpus, Upstart Thunder and Wildseed. If you're in Bristol and fancy swinging by that'd be mighty delightful, more info including tickets and venue can be found here.
I've been to the con a bunch of times (in fact it was the first place I exhibited Throat mere days after its printing) and there's always lots of interesting stuff to attend and rummage through, I have however been told that this year it's advance booking only so if you're up for it make sure you get your passes online beforehand.
Much gracias to Dani for the invitation and getting it all organised.
Posted by Struwwelpeter at 05:56 No comments: