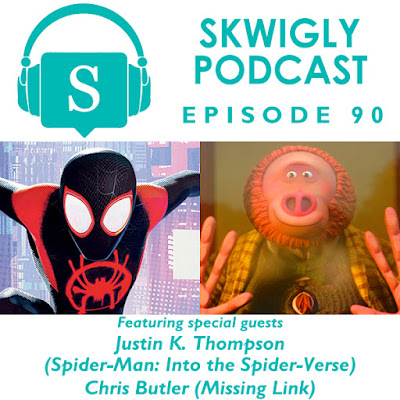 In the ninetieth episode of the Skwigly Animation Podcast it's a delight to welcome back previous podcast guest Chris Butler, speaking with Laura-Beth about Missing Link, his latest stop-motion feature with LAIKA.
Chris’s previous work includes his directorial debut ParaNorman (for which he also wrote the original screenplay) as well as his roles as Head of Story/co-writer on Kubo and the Two Strings and story supervisor on Coraline. His prior experience includes design and storyboard roles on a number of high profile projects including Tim Burton’s Corpse Bride.
This episode also features a recent chat I had with Justin K. Thompson, production designer on Spider-Man: Into the Spider-Verse. An Emmy Award–winning artist with over twenty years of experience in television including Star Wars: Clone Wars and feature films such as the Cloudy With a Chance of Meatballs series, Justin has worked for a variety of entertainment industry powerhouses including Disney, DreamWorks, Lucasfilm, Paramount, Sony, Cartoon Network, the Jim Henson Company and Warner Bros. Click here for more info and to find out how to be in with a chance to win a copy of the film on Bluray.
Also in this episode Steve and I natter about early trailers for Toy Story 4 and Farmageddon: A Shaun the Sheep Movie as well as recent animated series aimed at adults including Love Death + Robots and The Shivering Truth.
As always y'all can direct download, subscribe or stream below:

Posted by Struwwelpeter at 09:05 No comments: