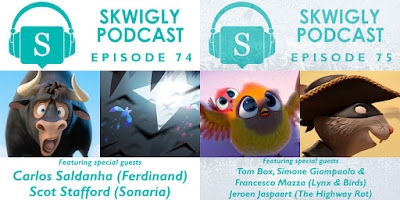 Before I retreat into Xmasdom there are a couple of new podcasts ready for your listenin' ears over on Skwigly. Last week we resumed our longer-running series with a couple of timely guest spots, namely Ferdinand director Carlos Saldanha and Google Spotlight Stories composer Scot Stafford whose first directorial effort Sonaria was recently released. Some of you may recall we spoke with Scot in the first Animation Composed podcast outing about a year ago regarding his music output.
This morning saw us hit episode 75 (not counting all the other series strands and minisodes) with a focus on some holiday animation, primarily Blue Zoo (guests Tom Box, Simone Giampaolo and Francesco Mazza)'s new internally-produced short Lynx and Birds and director Jeroen Jaspaert tells us about the latest Magic Light Pictures Julia Donaldson adaptation The Highway Rat that you can catch on BBC1 Xmas day.
You can stream them above or direct download them here (74) and here (75).
Right now I'm far far away doing my best to get all the character animation done and dusted for my latest film Sunscapades. There are some sequences in this one that I'm incredibly chuffed with and would love to post up here but it would sort of spoil the film so I have to abstain. In the meantime here are a couple of Insta-peeks:

More of that good shiz if you follow me on Instagram, the 34-year-old man typed without hating himself whatsoever.
Captain dipshit over here was already on his way to Portland for the holidays before he realised he'd left his Cintiq pen back at his home office in Bristol, so any productivity in the next couple of weeks is entirely owed to the brilliant Dani Abram who posted her spare one to me. Some beverages and a big shiny Special Thanks credit in her future, but here in the present let me point you in the direction of her website so you can bask in her awesomeness. Spirit of the season and that.
Now to the past, and a last little bleat of gratitude regarding Klementhro, the film I really should have drawn a line under since its online release but just won't shut up about. Mainly I want to extend my thanks once again to the Short of the Week team who took a punt on it, including Rob for the original write-up and Georg who included it in his Top 10 of 2017. Here's a cheeky repost of last year's holiday animation for the benefit of those who hadn't seen the original film when it originally went up:

Posted by Struwwelpeter at 14:47 No comments: 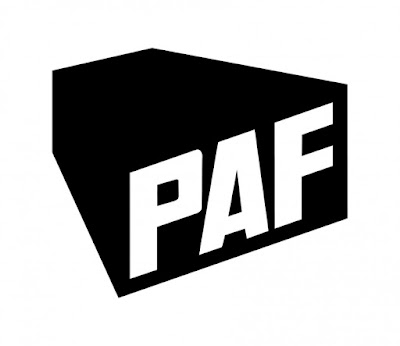 A couple of final 2017 screenings for Klementhro ahead - back in April of last year the fine folks at AniScreen demonstrated their immaculate taste by showing the film and will do so again as part of a special screening at this year's PAF Olomouc, taking place in the Czech Republic. The AniScreen in the Antique Bookstore programme will take place Saturday December 9th 2pm at the Antikvariát Olomouc - an antique bookstore, as you may have already deduced. 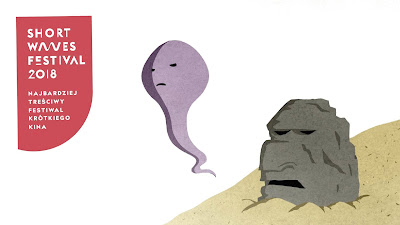 Another organisation who gave the film some love last year and have seen fit to do so again is the splendid Short Waves Festival, who have put together a special screening event for International Short Film Day. You can catch Klementhro as part of The Shortest Day on December 21st at the Under The Black Cat wine bar in Poznań, Poland. Best of all, both screenings are FREE, which is as cheap as you can ask for really. I'm sorry to not be there myself as they sound very cool, but of course I'm grateful for the inclusion. Keeps this old fella's holiday spirit up.
Posted by Struwwelpeter at 13:43 No comments: