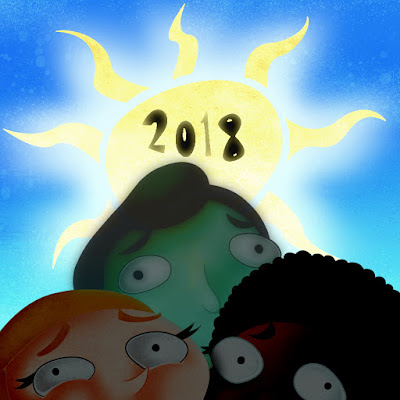 The evenings have been busy in the days since Sunscapades officially wrapped while I attempt to hammer out a plan of action as far as getting it out in the world. It's a slow-process and it'll be weeks or even months before I have anything to report on that front but watch this space for whatever I can come up with in the interim. Probably some teaser clips at the very least.

Meanwhile I'm happy to say that Klementhro will get a rare screening in his town of origin, that being here in rainy ol' Bristol. The film will be playing as part of the first CineMe screening in a few years, taking place at The Famous Royal Navy Volunteer at 8pm this coming Tuesday (27th). It's great to be involved as, under its original management, I had a very clement relationship with CineMe who included my work at a bunch of local events, featured a segment on myself/The Naughty List on their associated TV series Short Cuts and collaborated with Laura-Beth and I on our Love, Lust and Libido screening that served as something of a precursor to our current Intimate Animation podcast. Fittingly Laura-Beth's own film Boris-Noris will also be screened on Tuesday, as well as Blanked, a film from her Weird Eye companions Fiona and Hannah (both of whom helped invaluably with Sunscapades, as it happens).
Not much else to report, save for episode 77 of the ol' Skwigly Podcast that went up a couple days ago. If you didn't hear it yet then give yourselves a little treat - it's a quick one but it features the rather smashing (and Oscar-nominated, to boot) Glen Keane making a welcome return:
Posted by Struwwelpeter at 16:17 No comments:

Continuing the migration of my musical back catalogue to some of these modern distribution channels - what with me being so hip and down with the youth and all - February's re-release is my 2010 album The Book of Women.
This one was originally put out when my attentions were mostly focused on The Naughty List and, in a limbo between the eras of MySpace and Bandcamp, didn't really get much momentum compared to the albums that came before and after. It was a lot of fun to do, however, and has a lot of great musician pals of mine guesting on it, not to mention fond memories associated with it. So if you're in the mood check 'er out for free on Spotify (you can stream below) or grab it for keepsies on iTunes/Apple Music, Amazon, Bandcamp or even on compact disc if you like your unfashionably retro music formats. The CD has the added bonus of featuring a photo of me on the back looking like a bell-end if that's an incentive at all.

Posted by Struwwelpeter at 06:26 No comments: