It seems like only two years ago that we began the Skwigly Animation Podcast, mainly as it has. So my time perception is functioning highly, which is nice. 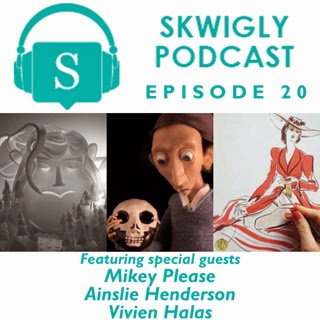 This month's entry also marks our twentieth episode and doesn't disappoint on the guest front, with Steve chatting to the spectacular The Eagleman Stag director Mikey Please on his new film Marilyn Myller while Laura-Beth brings us some insight from Ainslie Henderson on his crowdpleasing short I Am Tom Moody as well as his collaborative work with the equally-talented Will Anderson. Also featured are Vivien Halas, currently in charge of preserving the legacy of UK studio Halas and Batchelor, and BAA sting winner Jack David Evans. 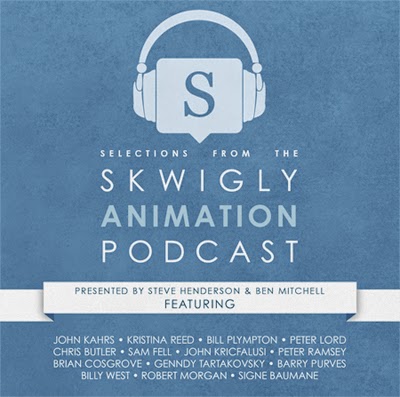 Also marking the anniversary is a slightly-tweaked version of our Selections From the Skwigly Podcast compilation I originally put together for a promotional CD last year. Featured on it are some of our most noteworthy guests from the first year, including Peter Lord, Genndy Tartakovsky, John Kricfalusi, Bill Plympton, Billy West, Brian Cosgrove, Barry Purves, Robert Morgan and Signe Baumane among others. Since then we've been privileged enough to get such equally notable talents as Eric Goldberg, Adam Elliot, Joanna Quinn, Richard Williams, Chris Landreth, Daniel Sousa, Chris Shepherd, Jerry Beck, Michaela Pavlátová, Lauren MacMullen, John DiMaggio, Richard Starzak, Kirsten Lepore, Daniel Greaves and Marc James Roels, with many more lined up for the rest of this year. I'm pretty proud of what we've managed to achieve and that we've stuck with it rather than let it peter out, which has been the fate of a lot of similar endeavours out there.
All of this is irrelevant, however, as for the third time in five years everything in my life has to take a back seat to the news that, once again: FAITH NO MORE are back! 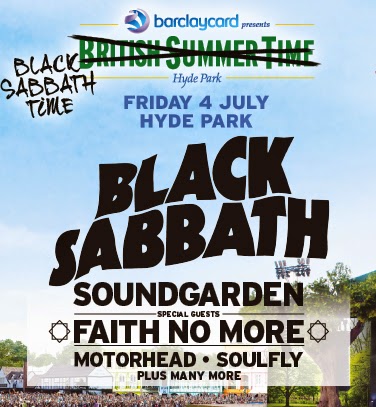 Granted, it's a support slot, but I'm not exactly going to sniff at getting to see Black Sabbath as well, am I? Or Lemmy, fer chrissakes?
Okay, I get it, I'm old. But in my defense, these bands were already old when I was a kid, so I'm not that old. Just an old soul. A merry old soul.
Posted by Struwwelpeter at 08:29 No comments: 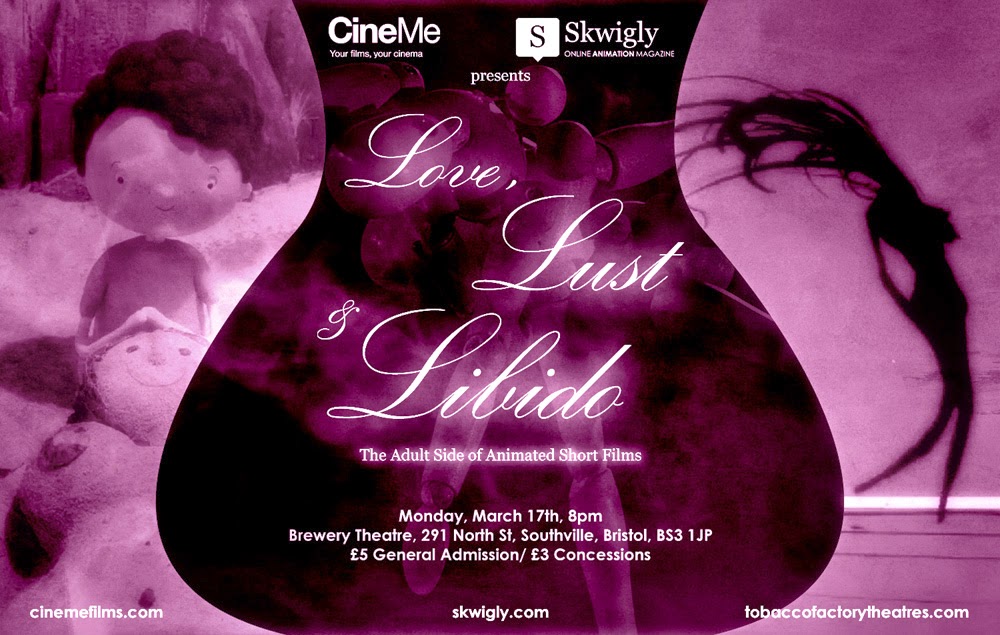 Grand news to report, in that Love, Lust and Libido, the Skwigly screening I put together with the lovely Ms. Laura-Beth went down a treat last night. Great turnout and audience response, hopefully we enlightened some folks. Here's the final film list as screened:

How to Make Love to a Woman
Dir. Bill Plympton

There's a good chance it might get some repeat showings at other venues around the UK, though probably with a tweaked playlist (El Gato was CineMe's contribution and a couple of the others only granted one-time screenings). Many thanks to James from CineMe for his assistance and Ed from...I'm not sure where, but he helped get us set up on the night. Special thanks of course to the filmmakers themselves and to Laura-Beth for coming up with the main idea. Here are some more of the online flyers I slapped together to promote the event in the days leading up to it: 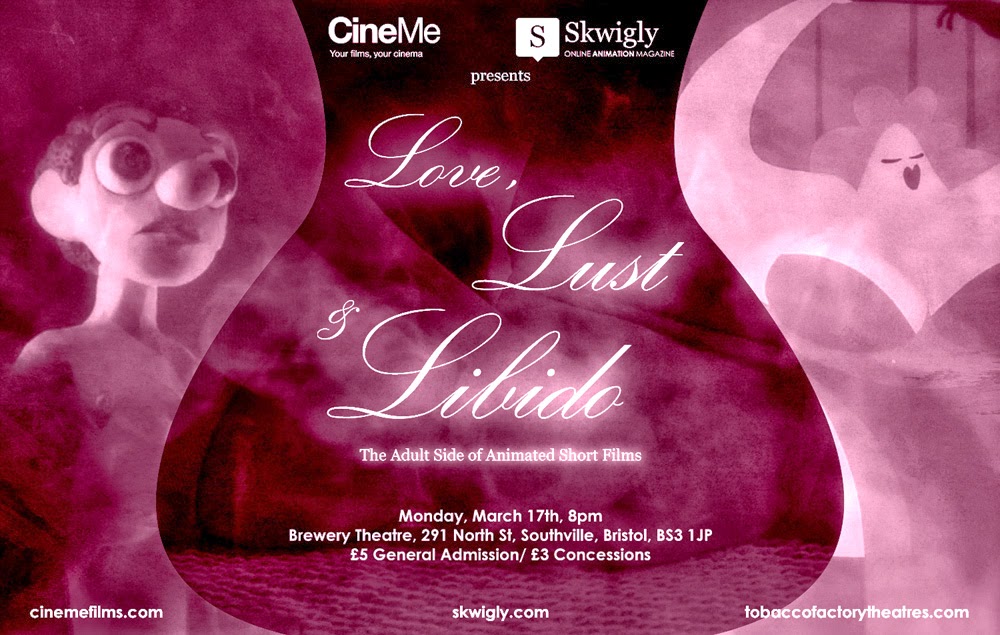 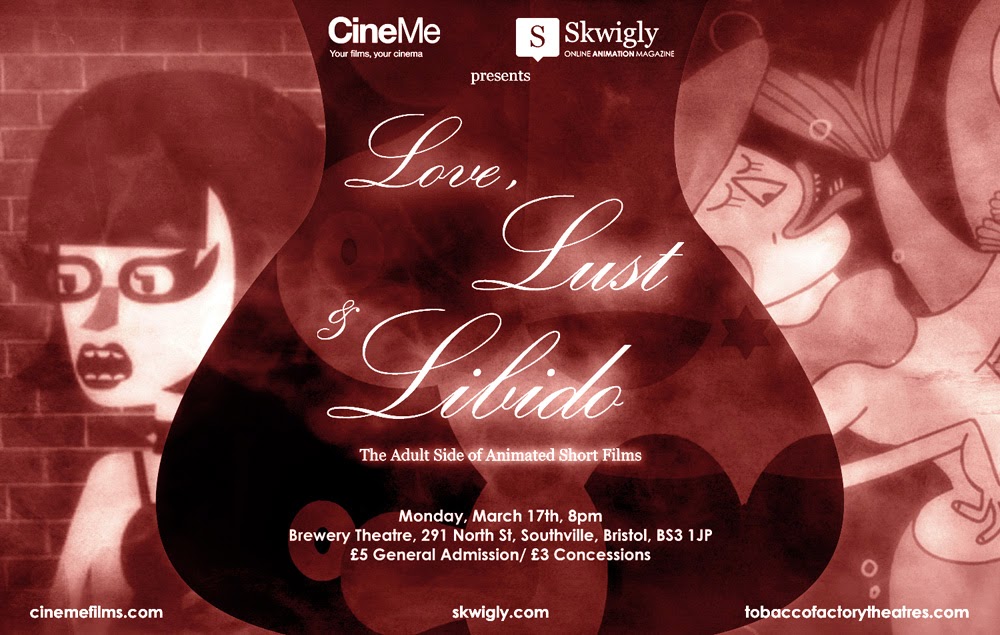 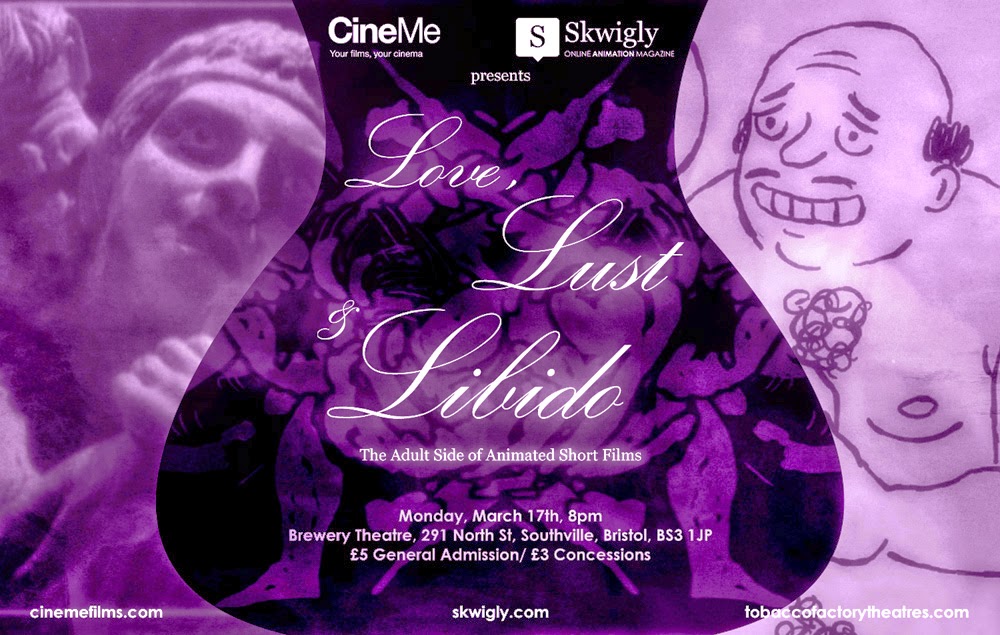 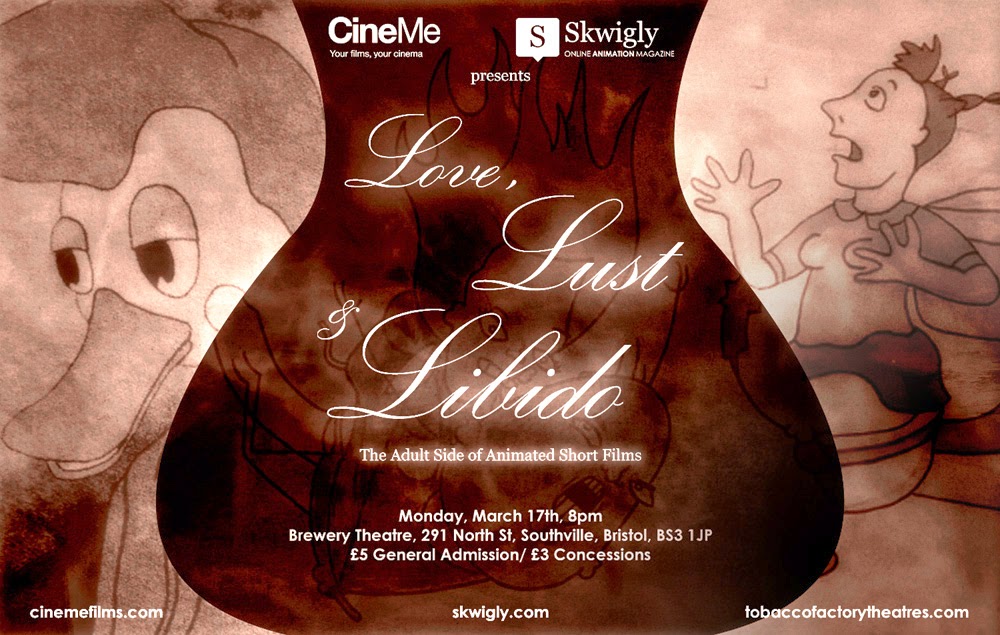 Also on Skwigly this week is an exclusive video from our recent British Animation Awards coverage in which we interview finalists Tim o’Sullivan (Sarah and Duck, Karrot Entertainment), Bjørn-Erik Aschim and Sam Taylor (Everything I Can See From Here, The Line), Gergely Wootsch (The Hungry Corpse, Beakus), Mark Nute (Laish – ‘Carry Me’):

Posted by Struwwelpeter at 11:41 No comments:

This here's one of those procrastination posts, the kind that keep me from getting on with the crop of proper, important stuff I have laid out for the rest of the evening.
I'm gonna go ahead and come clean, the blog's gonna be pretty sparse for the next little while. Aside from Skwigly roundups like documentaries and podcasts, since the Channel Flip contract ran its course I've gone back to working on projects that can't be publicly discussed. As far as personal projects go, there's always stuff on but I feel like some streamlining needs to be done. I recently sat down in front of Excel and put together a grand master plan to see if I could tie up all the loose ends I have as far as unfinished projects by the end of the year. The conclusion, in short, was "No effing chance."
Nothing new about this. I'm a habitual bite-off-more-than-I-can-chewer, always have been. For every five things I set myself, if I can get two done it's a minor miracle. I guess on some subconscious level I've adopted the approach from my musical hero, entrepreneur and sometime anger sphere Mike Patton:
Study the above video well, mainly the bit before the awfulness of Wolfmother deservedly gets a dressing down. Let's recap the upcoming projects he lists from about seven years back:

•"A couple film soundtracks" - these you gotta give him, as he's scored three feature films and an indie short in the years since.
•"A record of 60s Italian music with an orchestra" - this also got done, came out in 2010 and is bloody great.
•"A record with Dan The Automator" - one assumes this is a project called Crudo, very little of which ever saw the light of day if it was finished at all.
•"A record with Amon Tobin" - Yep, this never happened
•"Me and Rahzel are gonna do a record" - If only, but nothing's appeared as of yet.

So that's two out of five. Am I calling the man lazy? Hells no. I admire his proactivity, and one thing I myself have experienced many a time since this video was filmed is that lots of creative projects fall through for a multitude of reasons. Also, plans change; The Amon Tobin, Rahzel and Dan The Automator albums never materialised but instead we got three live DVDS (with Fantômas, Melvins and Kaada), a third and fourth Tomahawk album, six Moonchild albums, an album with Ictus Ensemble and over twenty guest spots on other records. Oh, and he also had the good manners to rejoin Faith No More for a three-year reunion tour. He performs countless live shows, does voices for video games, runs his own record label - the man's a busy sumbitch. Seriously, I don't understand why someone wouldn't be a fan, if you don't like one of his records you only have to wait ten minutes for a new one that sounds completely different.
So I doff my cap and try and take some cues from his attitude and overall approach as an artist. Not everything one wants to have happen will happen, but as long as you're enjoying the process, go for broke.

Obviously paid work comes first, but as far as things to attempt to get done in my free time, right now I have:
Bullies - fourth film which has been 'finished' since 2013 but still just doesn't quite hold together. If I tweak away at it much longer it's in danger of falling apart completely.
Speed - fifth film I don't think I've ever mentioned before, which is 'half' animated but, complicatedly, not completely written yet.
Throat: Book 3 - pretty much ready to go but waiting on final sign-off for the additional content.
Brain Scrapings - a second volume of sketches following on from Brain Spillage
My Pretties - a compendium of character designs, a very limited run of which went out in 2011 but since the surge of design work last year brought in I'd like to put out a proper, updated edition.
The Birdcage - latest Struwwelpeter album that has been marinating since 2011 after the release of The Book of Women.
Erica - first graphic novel since Throat, although I'm contemplating releasing it as a miniseries of five 20-page comics first.
On top of all these is a potentially major project I have to bite my tongue about (which I'm referring to just as Project Group-Hug for the time being), remastered reissues of all my major musical releases in the past decade or so, an assortment of behind-the-scenes vids, promotional whatchimajiggery and the demanding mistress that is Skwigly, which in and of itself involves documentaries, podcasts, regular written content and the odd field trip.
So, which of the above will get done? Who the bloody bloodying hell knows? Irritatingly I have two more film ideas I really, really want to get started on now, but that would take an already ridiculous situation and make it outright farcical. Realistically the next few months will yield two more Skwigly documentaries which I've been having a blast putting together, the final volume of Throat and, if I'm being super-optimistic, the final cut of Bullies. Whether or not that means other stuff will evaporate remains to be seen. I hope they don't but I don't exactly shift enough units to suggest that the world would stop turning if they do.
So I'll be retreating for a while, to focus on the slog and poke my head out for podcasts and whatnot. On a sort-of related note, I'll be with Skwigly at this year's British Animation Awards to get some coverage of the event, so knock wood there'll be a nice little featurette out of it next week sometime. If any of you folks will be there and I don't seem too squirrely, tap me on the shoulder and say hi.

One last thing, I recently found some source files for two EPs I put out in the lead-up to The Book of Women, one in 2008, the other in 2010. Both feature a smattering of early versions/alternate mixes and I figured there'd be no harm reposting them on my Facebook page. The physical versions of each have long since run out but they each come with printable artwork if you're old school and like your music in them shiny plastic boxes.

Posted by Struwwelpeter at 16:33 No comments:

Following the success of our first showcase evening, in two weeks we have a new Skwigly screening event here in Bristol. This time around we're teaming up with James Ewen of CineMe and Tobacco Factory Theatres to present Love, Lust and Libido. As the title indicates, the focus of the screening is themes of relationships and sexuality, so things are bound to get a little risqué.
Spanning all forms of animation and storytelling styles, the event is the brainchild of Laura-Beth Cowley and it's been a joy to curate it with her the past few weeks. Some of the international filmmakers involved include Skwigly favourites Ruth Lingford, Signe Baumane and Grant Orchard as well as a bumper crop of both established and up-and-coming talent. For a mere £5 (£3 with concessions) it's sure to be a fun evening out, so swing by and enjoy the ribaldry!
Love, Lust and Libido takes place Monday March 17th, 8pm at the Tobacco Factory Brewery Theatre. For more info and tickets click here.
Posted by Struwwelpeter at 08:29 No comments: