Ben up in everyone's business

It's been a busy few weeks of festive activity with the Encounters Film Festival, whose final week starts today. As has often been the case in recent years I was privileged to host some of the animation Q&A sessions that have been rolled out over the course of the festival. You can give those a watch below should you be so inclined.
Accompanying the presentation of the official selection this year is Reflective Encounters, a series of critical mini-write-ups of the shorts in competition by a variety of journalists and writers including Laura-Beth and myself. If you want to learn more about the films you can have a read of Laura's writings on Joanna Quinn's Affairs of the Art, Michelle and Uri Kranot's The Hangman at Home, Bastien Dubois's Souvenir Souvenir, Mathilde Parquet's Trona Pinnacles, Dina Velikovskaya's Ties, Daniel Gray's HIDE, Ann Thiel's Shtum, Petra Steptic and Maren Wiese's Jeijay, Yuan Elizabeth Xu's Breaking Bread, Noam Paul's The Quest for Freedom and the Longing for Belonging, Martin McNally's Excerpt, Michael Salkeld's Abstraction and Coffin from Gobelins. Meanwhile I take a look at Marine Blin's What Resonates in Silence, Tomek Ducki's Plantarium, Katarzyna Agopsowicz's Prince in a Pastry Shop, Chenghua Yang's Self Scratch, Paul Mas's Precious, Cliona Noonan's Wet and Soppy, Marie Lechevallier's Knot, Claude Cloutier's Bad Seeds, Przemyslaw Swida's Co-Ognition, Yi-Han Jhao's The Frolic and Renee Zhan's Soft Animals. 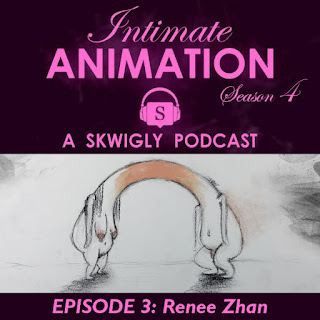 Renee also joins us for the latest episode of our Skwigly podcast Intimate Animation. Since beginning her animation studies at Harvard University, her films also include the Sundance Jury Award-winning Reneepoptosis (recently released online) and last year’s National Film and Television School mini-epic O Black Hole. Give it a listen below - or a download, whatever melts your butter.

In our latest episode of Animation One-To-Ones earlier in the month I also met Marie Valade, whose film Lolos (Boobs) is screening at part of the Encounters Late Lounge programme. Both equally poignant and witty, the film sees a young woman drawn in ink who is forced to deal with paper breasts that appear on her chest, leading her into increasingly unusual situations that reveal her deepest anxieties. We also discuss Marie's work as co-director of Festival Stop Motion Montreal, whose fifteenth edition just wrapped. You can watch the video above (don't forget to subscribe to our channel so as not to miss future episodes) or stream/download the audio podcast version.

If you're in a reading mood you might also want to check out my written interview with Ida Melum, whose NFTS grad film Night of the Living Dread is screening in both the animation and comedy programmes. The film - in which we follow the nighttime tribulations of Ruby, a young scientist whose attempts at sleep are obfuscated by an ever-relatable onslaught of embarrassing memories - brings Ida’s gift for storytelling, observational comedy and adventurous set pieces together with a full team of talented artists. She's definitely one to watch out for.

The Manchester Animation Festival has revealed its 2021 programme and with it the rather splendid news that Laura-Beth's latest film Crafty Witch (on which I made some noises and tickled some ivories) will be part of their MAFter Dark screening. This will take place in-venue at HOME 8:30pm on November 17th and online an hour later. The day before, festivalgoers can virtually join Steve and I for another edition of our rage-inducing Skwigly Quiz. That'll be at 9:30pm on the 16th so hope to see some of your lovely faces in those Zoom windows. Grab your passes from noon tomorrow!

You can catch Crafty Witch before then - this week, in fact - if you happen to be hanging out in Maribor, Slovenia where the 11th StopTrik International Film Festival is about to kick off. The film will be screening this Thursday at 3pm in the Big Hall at the Vetrinj Mansion as part of the festival's Panorama programme. Don't forget it's also part of the Encounters programme for the next couple days if you happen to have a pass for that.

Look, I went full circle; I'm smooth like that.