NOTE: Your browser will need to be able to view animated GIFs for this entry to make sense.
One thing I've learned over the years is that I'm a glutton for punishment. This has manifested itself in a variety of ways throughout my life. Every academic project I've been assigned has been completed mere moments before the deadline after an entire sleepless night of coffee consumption, panic attacks and shameful weeping. Every girlfriend I've had seemed to share the same adorably infuriating set of psychoses and repressed hatred toward all men (with me as their singular representative). Every five days of healthy eating and consistent exercise is capped by a weekend of sloth and nacho consumption, which succesfully undoes any potential for self-improvement.
The list could go on, but I'd wind up writing a freakin' novel. The most recent example would be the sequence I am currently working on for my film. It is a POV shot in which the audience, through the eyes of the Hunter, chases the Duck around the cabin into a previously unseen trophy room. The sequence is briefly broken up by a side-view shot of the Duck avoiding buckshot as it flies past his head. The whole sequence lasts about fifteen seconds and is represented by these three storyboard panels:

To view the animatic and see the proposed scene in context, hop to this entry.

Piece of piss, right? Well, sure, there are many ways it could be, but that wouldn't sate the beast of self-loathing I apparently have working my controls.
To be fancy-dancy - and compensate for some inadequacy in my life I've yet to address consciously (I'm guessing 'Napoleon complex' as I don't even scrape 6') - I've decided to create a tracking shot using my 3D CGI set I constructed way back in March, print it out frame by frame and rotoscope the scene.
Rotoscoping is that somewhat 'cheaty' animation method where you essentially trace over action that has been created independently. Examples of this include Ralph Bakshi's hit-and-miss stab at 'Lord Of The Rings', the 'Lucy In The Sky...' sequence from 'Yellow Submarine', that Ah-Ha video and - fuck it - my one-minute film from the beginning of the year. These all relied on actual live-action footage, while the scene I'm currently slogging through uses this piece of simplistic computer animation as a reference:

To be a show-off, I've added a basic wallpaper texture which makes the rotoscoping process about a billion times longer, not to mention the wood panelling that appears after we round the corner. Because this line quality is way too smooth, by tracing over each frame in the shaky, thick-line style the rest of the film is in it should hopefully look impressive without sticking out too much. Here's how it looks at the moment with the first part done:

Now, this obviously needs colouring and clean-up, but I do like the way it's turned out. There's a nice 'boil' effect (where the lines sort of wiggle) which I've always enjoyed as a presence in the work of other animators such as Bill Plympton and Joanna Quinn. It keeps the rough look of the film without being so obtrusive as to wreck the shot, a fine line I've been treading since production on the film began. Without wishing to jinx myself, I would say that, as time passes, it's getting far easier to keep my balance in this respect. So coming up next, the full-colour version! Ah, this modern world of ours...

Posted by Struwwelpeter at 16:38 No comments:

At last we get some nudity!

Well, I kept my word, because that's just the kind of guy I am. Shame about all the other horrible facets of my personality though. Anyways:

These visuals are developed from some of the layouts that were shown in previous entries over July and August. I figured that the small handful of you who have stuck with me all this time deserved some full-frontal nakedness. It's my way of saying thanks.

Having described the fundamentals of the animation process for my film, it has in some ways eliminated the need for continuous blogging. What I am currently working on are sequences that all draw upon the limited and full animation described in prior posts, so with that knowledge in mind all I could really talk about at this point is the deconstruction of each scene and shot as they are being worked on. Truthfully, that would be boring, not to mention that it would suck out a lot of the soul of the film.
So, until I move on to other processes, I'll just post some more storyboard/end result comparisons, just to give you more of a flavour of things, and to prove that I'm still getting stuff done.To start with, here's a layout for a brief scene in which the Hunter finally snaps when lying in bed. It's a fairly simple sequence - panning around the bedroom until we zoom in on the Hunter's face. The entire layout was done on A3 to allow for more background detail:

Here's the inked-in version, with more details (such as cement between the bricks) and definition:

And here's how the final shot will look at 16:9 and in colour, compared to the original storyboard sketch. If you look closely you can see that the Hunter has been redrawn with more detail as a separate layer, so that the line quality doesn't deteriorate so much when the shot closes in:

For now that's the only interesting thing I've got for y'all. There'll be more, I swear!
Posted by Struwwelpeter at 16:48 No comments:

Case Study: "Float over here so I can punch you" 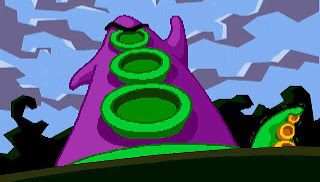 If I were to do the fair thing and disregard the Super Mario franchise, my two fondest memories of playing video games as an adorable whippersnapper also happened to be, in their own way, two of my biggest creative and stylistic influences (in visual terms). This is no doubt because they themselves were inspired by the classic, manic era of animation that hit its stride in 40s and 50s. 'The Simpsons' had reminded the world that cartoons could be smart and dialogue-driven, 'Ren & Stimpy' had reminded the world that they could be insane and unrestrained. This renewed interest in animation during the early 90s bled into some video games which had, by good fortune, just about reached a level of technological sophistication that accommodated it. One such game was 'Earthworm Jim', which at some point I'd like to devote a separate entry to. The game that ever-so-slightly trumps it was a revelation to a lot of console-oriented videogamers like myself at the time. 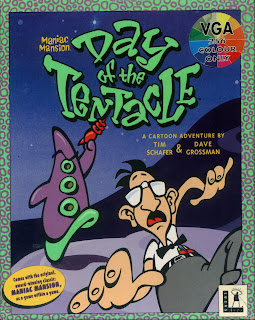 'Day Of The Tentacle' (a 1993 sequel to the 1987 game 'Maniac Mansion' which had already become an old chestnut) was one of the earliest examples of a point-and-click adventure that was, essentially, an interactive cartoon. To a nine-year-old this was a truly wondrous concept, and in my not-quite-adulthood it has dated surprisingly well, for a number of reasons: 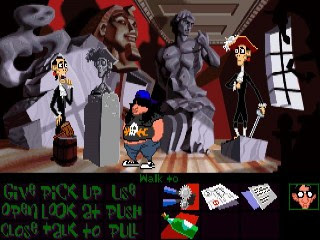 The premise was fittingly nonsensical, referring to exposition set up in 'Maniac Mansion' (which I never got through) the player switches between three college students who explore the same building in the past, present and future respectively. The gameplay involves using one, two or all three characters to solve a series of bizarre puzzles - an example of the abstract thinking required being: the guy in the past needs vinegar to help power a battery, so he has wine transported from the present which he then seals in a time capsule. The girl in the future then has to locate the capsule, open it and send the bottle of what-has-now-become vinegar back to the past. Seriously, you needed that walkthrough... 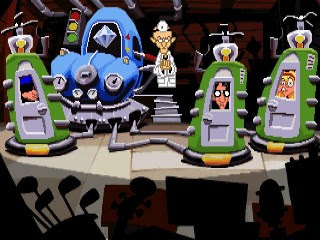 As with any successful cartoon, the characters were endearing and nicely developed - Bernard, a booksmart sort-of-leader; Hoagie, an overweight, hairy music enthusiast who I seem to have alarmingly morphed into; and Laverne, who is either baked or semi-retarded - either way every girl I wound up dating has reminded me a little of her. I guess this game seeped into my life in many ways. 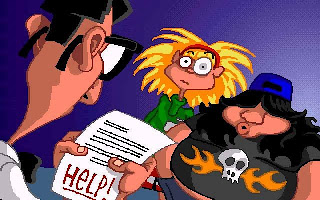 The supporting characters were also well-conceived. The family of villains from the previous game are now semi-allies, although in 'Tentacle' you cannot die, so pretty much all the characters have some function or other that you need to harness to move the story along. They are essentially props with well-written dialogue.
Another crucial contributor to the game's overall environment - as, again, with any decent cartoon - was the music, which was expertly orchestrated and timed, and yet the factor that dates the game the most (it is a feast for the ears if you can get passed it being General MIDI).
It's tempting to simply list all the quotable dialogue, ingeniously-crafted puzzles and twists that made the game such a work of art, but neither you nor I have that kind of time. Well, okay, you probably don't. However, thanks to that ever-resourceful archive of pop-culture that is YouTube, here are some clips I found:

As a sidenote, I'm glad that these are mostly clips from playing as Laverne as she was my favourite. I'm not sure whether the voice actress's monotone reading of her dialogue was deliberate or because she was just awful. Either way, it's brilliant. The (sadly absent in these clips) highlights of her performance would be the occasional manic giggling she'd launch into apropos of absolutely nothing. But I digress... 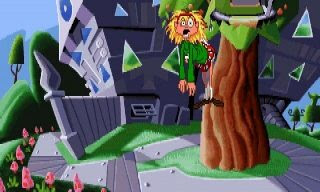 This game was a huge influence on 'Mitchells In England', if for no other reason than it sparked a desire to create my own cartoon universe with my own characters. Eventually when I got my sea-legs, drawing-wise, a lot of visual derivations started to appear. This has also been the case with 'House Guest', and as I get more comfortable with the animation process and the urge to get a little ambitious with it, I find myself reminded more and more of 'Tentacle'. It has me wondering whether my generation would be the first to actually count video games as a legitimate creative influence. It also makes me a little sad that polygonal, 3D gaming took over so shortly afterward and the marriage of traditional 2D animation and the gaming world never really developed far beyond the 16-bit era. Frankly it's a little jarring that things I hold dear to my heart from my childhood are already being dismissed as passé - shit, I didn't think it'd happen so soon...
Thanks then to the basement geeks who developed console emulators and ScummVM. I can stay mired in the past indefinitely! If the game can be located, I'd urge anyone with an interest in animation history to give it a whirl. I honestly consider it to be a frequently-overlooked milestone. 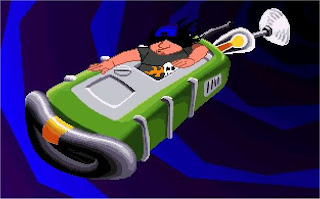 And 'Sam & Max' wasn't too shabby either.
Posted by Struwwelpeter at 12:53 No comments: