After a particularly irresponsible holiday season (well, long weekend) it's taken this long for my feet and genital visibility to return, though it'd have probably been far longer if it weren't for an all-consuming commission that's rendered me a borderline hermit. I can't really give out any details but I'll say it's a pretty unique circumstance that could end all manner of different ways, so it's keeping me on my toes. 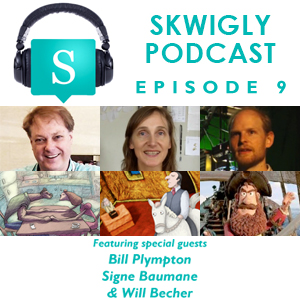 In what slivers of free time come my way I'm going through the usual motions of eating, sleeping, engaging in the bare minimum of human contact required to remain a functional adult and doing the ol' Skwigly thang. On that latter note, our latest podcast starts off the new year on an especially strong note, discussing the virtues of the various animated films in the running during the current awards season, with a guest appearance by Annie-award nominee Will Becher of Aardman. 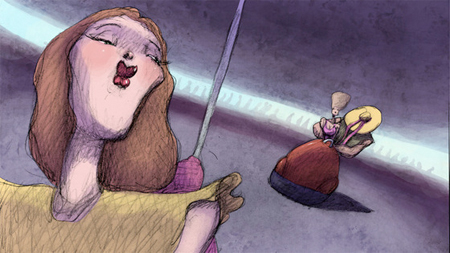 Our main guest for the episode is one of my personal favourites Bill Plympton, my first Skwigly interviewee and someone who I'd hoped to get on the podcast since it began last March. This time around we chat about his latest film Cheatin', a dark love story/comedy of errors that looks to be his most ambitious film yet. Part two of our interview where we discuss the multitude of other projects he's embarked on in the year and a half since our first meeting will be included in our February podcast.
Our third guest Signe Baumane was something of a last-minute addition who I'm very happy to have gotten on board in time. Signe is a filmmaker I know from Avoid Eye Contact, a collective of NY-based independent animators including Bill Plympton, Nina Paley, Fran Krause and PES. As well as working with Bill she's made plenty of short films on her own and is wrapping up her first feature Rocks In My Pockets. In the past couple weeks I've become absolutely smitten (in the professional respect sense, of course) with her work and in particular her film's production blog, which is full of amazing stories detailing not just the film but the wealth of life experience that lays the groundwork for its story and message. Its logline is "A funny film about depression" which pricks my ears up some as that's a tricky one to pull off; More often than not 'funny' gets confused with 'maudlin', but when it's done right it's spectacular - Look at Adam Elliott or Todd Solondz. 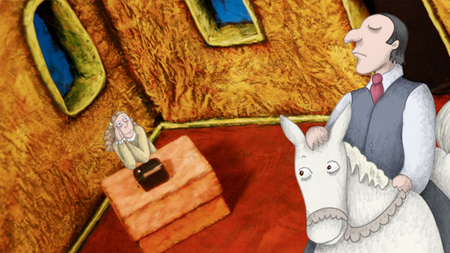 Also as someone who recently put out what could arguably be considered "A funny book about cancer" I feel a strange, hard-to-articulate connection with the film. Certainly having now spoken with Signe for the podcast her and I seem to be cut from a pretty similar cloth. We ended up chatting for well over an hour and, regrettably, only 20 minutes of it could make it into the episode. But so enamoured am I of her insight and perspective I'm inclined to put up a longer version of the interview, if not on Skwigly then here on this blog. So be on the lookout for that sometime early February.
In the meantime you can download the latest podcast here or stream it below:

For more information on Bill Plympton's film Cheatin' check out
• CHEATIN' on Kickstarter
• Scribble Junkies
And for Signe Baumane's Rocks In My Pockets go to:
•ROCKS IN MY POCKETS on Kickstarter
•Production Blog

And here's Bill sketching out the female lead Ella from Cheatin' for me after our first interview, back in May 2011. I'm sure I've posted this before, but here's a fancy HD version:

Posted by Struwwelpeter at 12:27 No comments: