I now have some specifics regarding a couple of previously mentioned screenings for "The Naughty List". It will be shown on Saturday 23rd at the Dawson City Film Festival's 'Beyond Aurora' section which begins 11:30pm. Also included in that selection is David O'Reilly's short "The External World" which is a pretty spectacular piece of work, so I'm very happy that my li'l toon is in good company.

A couple months down the line it will close the 4pm short film screening at the Detmold Short Film Festival on June 9th.

Also, just today I learned of its inclusion in Florida's Citrus Cel Animation Festival on April 10th...which was five days ago. Ah well, still nice that it's getting out there. Looked like a grand event overall, some really nice shorts included and it opened with Bill Plympton's "Idiots & Angels". I may have mentioned I'm a fan of his.
Speaking of which, I've spent the last few days inhaling his new autobiography "Independently Animated". I want to give it a proper review sometime soon but in short I'll say it's an essential read to any auteur animators out there, obviously for general fans of his as well. What I especially liked about it was learning about stuff he'd done I hadn't known about, such as this lovely piece on the cultural 'value' of abstract animation:
Well, much like Richard Gere in that army flick, 'I got nothin' else...'
Laters.
Posted by Struwwelpeter at 15:17 No comments:

I returned to my apartment after work a few days ago to see this a-waitin' for me: 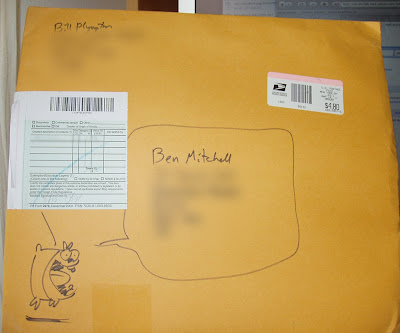 You can't not be in a good mood when one of your industry heroes personally sends you a package. The closest experience I've had so far was when Milla Jovovich issued that restraining order. In this case it was some amazing and unexpected original artwork from Bill Plympton in exchange for my contribution to "Guard Dog Global Jam" (more info here) which has, according to the man himself, 'been a big success, lots of festivals from around the world inviting it for exhibition'. I've been fortunate enough to see the finished film and it is truly excellent, inspiring and humbling all at once. Plus seeing my name and stupid grinning face in the credits of a Plymptoon = an instant animation boner.

While I'm already up and a-bloggin', here are some more festival inclusions for "The Naughty List". At some point between the 9th and 13th June it'll be shown at the International Short Film Festival Detmold in Germany, marking its third festival in the great nation of wurst.

It also makes its third appearance in Canada later this month at the 3rd Annual 'Show Us Your Shorts' Festival of Short Film in Calgary on the 22nd.

On the 30th it'll be screened at the Magma Short Film Festival in New Zealand. I fuggin' love New Zealand. I was only there once when I was twelve but it made a big impression and I'm officially envious of my own film. Stupid smug film, getting to see the world when all I see day in and day out is the same view from my studio window and sure sometimes the hot Russian girl in flat 21 walks in front of her window topless but you can only be enchanted by the same pair of nipples for so long which I suppose is why I'm so not into the concept of monogamy and will in all likelihood die cold and alone in my own arms.
So...that's...where I'm at...yep.
The cool thing is that the film has at this point been accepted into over twenty festivals in less than six months which, as it took significantly longer for "House Guest" to be as widely screened, I'm taking as a very positive indicator that the quality of my work is improving.
As I can't think of a way to wrap this one up, I'll just leave you with a random panel from a completely separate comic book project I'm working on: 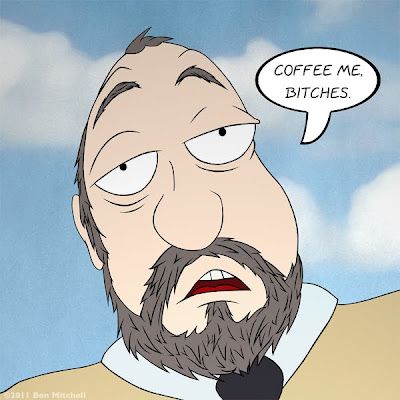 Posted by Struwwelpeter at 04:44 No comments: