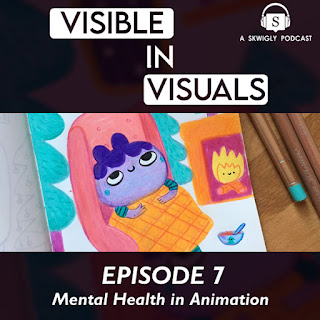 It's been pretty quiet on the festivals front, with the only news being it's about to get quieter as the Brussels Independent Short Film Festival: Courts Mais Trash (which this year includes Speed) will be postponing its March dates to instead take place April 21st-28th as a hybrid event. Honestly it's anyone's guess what will or won't be able to go ahead by then but I'm keeping my fingers crossed as they're a lovely bunch. Updates when I have 'em.
Posted by Struwwelpeter at 05:30 No comments:

Good gravy these weeks are spinning by quick - yet at the same time life has slowed to an interminable crawl. What a fun little paradox. 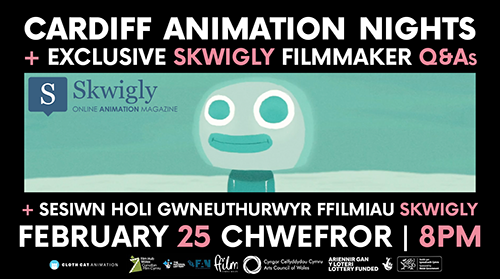 If, like me in all of my adorableness, you're inching incrementally closer to having just about effing had it and could do with some distraction then you might want to pencil in the next Cardiff Animation Nights. This will be their ninth online edition and, while I'm bummed it's been over a year since we last got to do it in person over at Kongs, you've got to give the team props for keeping their community spirit alive and kicking. As with some of their previous editions Laura-Beth and I will be including some exclusive Skwigly filmmaker Q&As, so be sure to tune in to their YouTube channel 8pm on February 25th and check it out.

If you haven't swung by Skwigly in a while it's worth mentioning that we're still churning out our interviews with some of the industry's best and brightest. Among the filmmakers we've featured over the past year or so whose work has qualified for this year's animated short film Oscar nominations are Frank Abney (Canvas), Nadja Andrasev (Symbiosis), Jordan Canning/Howie Shia (4 North A), Michael Govier/Will McCormack (If Anything Happens I Love You), Shoko Hara (Just A Guy), Steven Clay Hunter (Out), Andreas Hykade (Altötting), Max Lang/Daniel Snaddon (The Snail and the Whale), Catherine Lepage (The Great Malaise), Jean-François Lévesque (I, Barnabé), Arnon Manor/Timothy Ware-Hill (Cops and Robbers), Louise Mercadier/Frederic Even (Sororelle), Michaela Mihalyi/Dávid Štumpf (SH_T HAPPENS), Robin Shaw (The Tiger Who Came to Tea), Benjamin Morard/Frederic Siegel (The Lonely Orbit), Josephine Lohoar Self (The Fabric of You) and Soetkin Verstegen (Freeze Frame). Much gratitude as always to the folks for giving us their time as well as Laura-Beth and our other brilliant Skwigly team members Aaron, Nathan, Martyn and Amy for pitching in with the interviews. 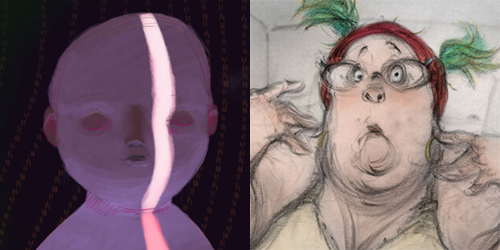 This week also sees two animated NFB productions screen at Clermont Ferrand, one of the biggest festivals around - if it passed you by a few months back you can read an interview with Daniel Gray (co-director of T.O.M. and teeth, a prominent case study in my book Independent Animation) about his film HIDE, plus the festival marks the premiere of the incomparable Joanna Quinn's long-awaited new Beryl film Affairs of the Art. Check out parts one and two of Steve's chat with Joanna and writer/producer Les Mills and look out for an extended interview as part of a future Skwigly podcast.

Something else that might serve as a welcome diversion is the upcoming BBC series Chris Packham's Animal Einsteins, a six-part look animal survival skills. I'm not sure if I can elaborate on what specifically my connection to it is right now, so for the time being just take it as a general recommendation. I mean, who doesn't love animal stuff? That'll kick off on February 21st on BBC2.

Posted by Struwwelpeter at 10:19 No comments:

Piggy, where'd it all go wrong? 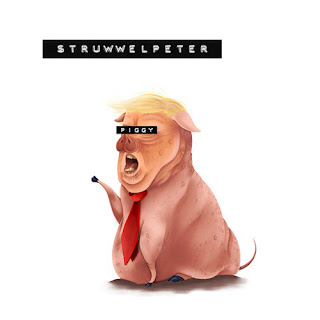 Man alive, we actually made it to this point. To mark the occasion here's a completely unrelated new song I wrote about a certain Piggy that outstayed its welcome. The last Struwwelpeter EP in anticipation of the nearly-done new album My Head Is Too Small For My Body is available from today via Bandcamp (stream below) featuring the exclusive extra track Mysterious Bruises with guest vocals by Laura-Beth as well as an alternate acoustic mix of the title track.

Gracias to Hannah Stevens of Weird Eye Collective for the painterly assistance with the EP cover art.

Posted by Struwwelpeter at 14:02 No comments:

The first Speed update of 2021 comes with today's announcement of this year's Brussels Independent Short Film Festival: Courts Mais Trash Official Selection and programme. I'm happy to say I've had my trashy ass invited back after these fine folks gave Sunscapades a couple screenings back in 2019 - festivalgoers can catch Speed as the first film of their Opening screening alongside other Courts Mais Trash alum. All being well it will take place at Cinéma Aventure in Brussels on March 10th although I don't know the actual time just yet.

Going back a couple films it's worth mentioning that, in anticipation of some to-be-determined screening events in the summer, Bulgaria's Kinematograf NGO have furnished me with Bulgarian subtitles for my 2015 short Klementhro, which was mighty nice of them. So now you can share the poignant journey and emotional message of everyone's favourite paddle-enthusiast to all the Bulgarians in your life!

Posted by Struwwelpeter at 03:15 No comments: