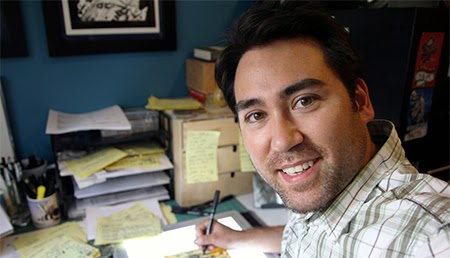 The latest Skwigly feature is on a brilliant chap who I got to chat to recently as part of Project Group-Hug, Canadian animator/documentarian Jeff Chiba Stearns. The piece focuses on his short film Yellow Sticky Notes, an extreme-auteur production (it was animated entirely straight-ahead, using Post-Its) that went viral in 2008, as well as its follow-up Yellow Sticky Notes: Canadian Anijam which extended the same production approach to a mass collaboration with every exceptional Canadian animator under the sun - including the likes of Cordell Barker, Janet Perlman, Paul Driessen, Alison Snowden, David Fine and many more. Check out the interview (and watch the films) over on Skwigly.

While I'm a-blogging I want to mention that on Saturday February 7th I'll be exhibiting at my first indie comics fest in a good long while. The True Believers Comic Festival will take place in my old stomping grounds of Cheltenham at the Racecourse and will be open to the public from 11:30am. Please do swing by and say hello, I'll be predictably touting my graphic novel wares in a bid to shift some leftover stock. On sale will be House Guest: The Graphic Novel (with a free DVD of the film), Brain Spillage and of course multiple versions of my 2012 labour-o'-love Throat. I also want to mention that I will be selling the last handful of copies of my 2006 comic anthology That Isn't Funny, You Stupid Child. Once these are gone, they're gone for good (I'll be pulling the eBook editions too). 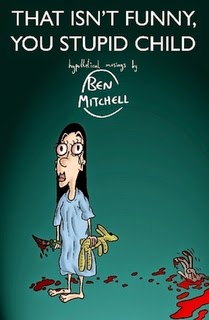 Not that anyone's asking but there are two main reasons - I'm not that crazy about the overall presentation of the book and, being nearly a decade old, I wouldn't say it's dated terrifically. I'm still proud of the stories in some regard and, at the time, I felt I was being terrifically witty in lampooning all sorts of social taboos and bigotries. It seemed back then that people were getting smarter and more attuned to the role satire can play in pointing out the ludicrousness of intolerance, but I've watched with increasing despair in subsequent years as it's all gone the other way instead. It's less 'political correctness gone mad' (possibly one of the most misused phrases in the English language) than Poe's Law run amok. More to the point - especially as I'm loathe to self-censor in light of recent events - I feel like I've since moved away from my outlook and artistic direction of that time. So if you fancy yourself a Ben Mitchell relic that may or may not serve as an appropriate blackmail tool (for the shite drawings more than anything else) down the line, this'd be your last opportunity to grab it.
Check out the festival as well as the other smashing guests and exhibitors over at oktruebelievers.com - hopefully catch some of you there!
Posted by Struwwelpeter at 06:40 No comments: 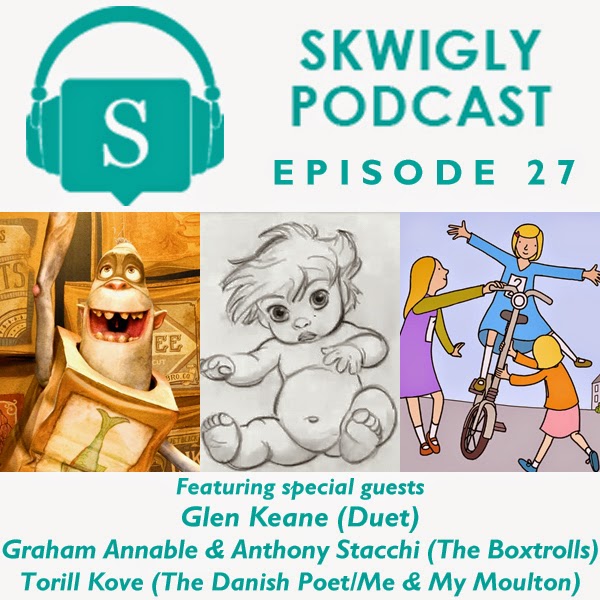 This first Skwigly podcast of 2015 is up today!
Be sure to stream, download or subscribe to never risk being out of the loop and, rightly, shunned by your betters.
In this episode we have Julia Young's extended chat with Disney veteran and Duet director Glen Keane; Steve Cav and earnest protégé Fiona Stuart-Clark grill the directors of the Oscar-nominated The Boxtrolls (out to buy next week) Graham Annable and Anthony Stacchi; and I dig out my interview with Torill Kove of the NFB on her latest short Me and My Moulton, which is also amongst the Oscar nominees. You can also watch a bit of said interview and get a glimpse of the film itself in one of my Lightbox docs from last year:

Elsewhere Steve and myself keep it real whilst recalling such technological game-changers as the Game Boy Printer. Mmmboy, that's good listenin'!
Posted by Struwwelpeter at 14:43 No comments:

As I expect nobody has noticed, the digital version of The Book of Women is no longer listed on Amazon (you can still buy the physical CD for the foreseeable future). If you're just joining us, that's my last album which came out over four years ago. LOOK AT IT:
All in all it's had a good enough run thus far to keep it available in some digital form, so I've put it up on Bandcamp. This is the latest in a long line of music hosting sites I've haunted like the ghoul I am, starting with the original mp3.com way back in '99, through to Cafepress, MySpace, Createspace and SoundCloud. The latter is still the main place to go for free tracks/exclusives/remixes et al but Bandcamp has the advantage of letting you purchase individual tracks and streaming the album in full. One of many protracted projects of mine has been the gradual remixing/remastering of my back catalogue which was halted when I heard about the new VAT laws for digital distribution in effect this year. Bandcamp seems to have the most streamlined approach to dealing with this so it's very likely I'll reissue all the older stuff digitally through them in the near future as well.
As touched upon last month, a new album called The Birdcage is also in the works and will hopefully be ready by the Spring. To prove I'm not a lying liar here's a sampler of in-progress tracks I put up on my Facebook page a little while back:


Post by Ben Mitchell - Creative Offal.
Posted by Struwwelpeter at 08:37 No comments:

Labels: music, struwwelpeter, The Birdcage, The Book Of Women

The lists were compiled by Marco de Blois who, amongst other laudable animation-related activities, is the main programmer for Quebec's Sommets du Cinéma d’Animation. As this Cartoon Brew article makes clear, one thing I can't be accused of is going with the crowd. That being said, many of the other critics' favourites would easily make my top 20 (also some folks cheated a bit and picked films from the year before, but what am I, the list police?). In fact, for the sake of why-the-hell-not, here's my next ten favourites of last year:

Give those all some investigation, my lovelies. Anyway, our first Lightbox of 2015 is on the making of The Dam Keeper. Seriously, if you haven't come across this film yet at all, treat yourself to a peek here:

You can also hear more from Rob and Dice in episode 25 of the Skwigly Podcast.
Also in the running are Daisy Jacobs, Joris Oprins, Disney with Feast and, happily, Torill Kove of the NFB, who I interviewed during the production of the film.
Aside from the comparatively indie Song of the Sea, the feature film noms were all fairly predictable. Though I'm not so up-in-arms about The Lego Movie being ignored I would've loved to see Bill Plympton's Cheatin' and Signe Baumane's Rocks In My Pockets in with a shot. Que cera cera. Fortunately this arrived today so I can start my weekend off right: 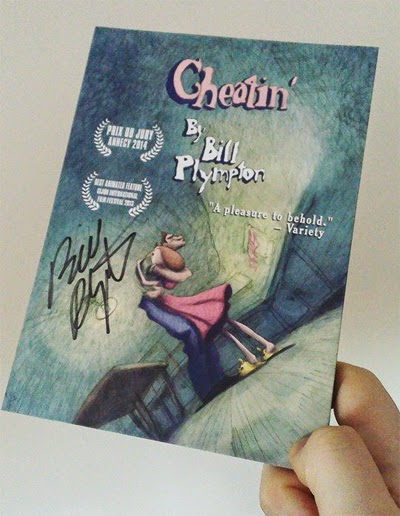 Going back to the shorts, Alan Holly's Coda really stood out to me last year and I urge everyone to keep their eyes open for it:
That this film and Glen Keane's Duet (admittedly more successful as an interactive experience) didn't make the nominations is a massive shame - I've yet to see Plympton's Footprints but I'm sure I'd feel similarly - massive kudos to them at any rate for getting shortlisted.
Also worth mentioning that amongst the BAFTA noms was Will and Ainslie's Monkey Love Experiments, which has already won itself a Scottish BAFTA but one more wouldn't hurt.

Fantastic stuff from those two, though this one will probably remain my favourite for a good long while:

Posted by Struwwelpeter at 16:01 No comments: