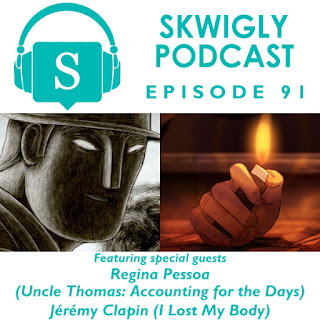 In episode 91 of the Skwigly Animation Podcast we talk through some of the film highlights of this year’s Annecy festival award winners, including new work from Bruno Collet, Ludovic Houplain, Thomas Renoldner, Pedro Casavecchia and Daria Kashcheeva.
I'm also delighted to welcome special guest Regina Pessoa, whose latest film Uncle Thomas: Accounting for the Days picked up the special award for Best Original Music as well as the Jury Award for a Short Film following its debut earlier this month at Animafest Zagreb.
We also speak with Jérémy Clapin, another double-winner at this year’s edition whose new feature film I Lost My Body won the Audience Award and the Cristal for a Feature Film. Having also picked up the Nespresso Grand Prize after screening at the prestigious Cannes Film Festival’s International Critics’ Week the film has been picked up for distribution by Netflix.
Also discussed in this episode: Annecy’s swelling footfall, making Aladdin ‘hip’, when post-production works against animation and the plight of long-running Brazilian festival Anima Mundi, who are presently raising funds to ensure next month’s edition can go ahead.
Stream below or direct download:

Posted by Struwwelpeter at 18:30 No comments: