Happy Hallowmaween my friends, fairweather friends and frenemies alike. May it be creepy, cooky, mysterious, spoo- alright, you get the idea.
Halloween, by sinister coincidence, tends to occur the same week as my birthday practically every year - thas'sum scary shiznit, yo. Typically I like to meld the two into one week-long alcolohol'n'sugar fest, and this week I've been particularly spoiled.

Midst my hedonism I found some time to throw together a piece on one of my favourite UK animators, stop-motion nightmare-weaver and fellow Pattonophile Robert Morgan. After a lengthy podcast interview last year in which we discussed his BAFTA-nominated Bobby Yeah - a Lynchian, Svankmajerian and Quay-ier-ieran stream-of-consciousness masterwork - he's produced another new film Invocation for this year's Random Acts scheme. Combining live-action with his fittingly gruesome signature style, the short is set to debut tonight so tune in to Channel 4 at 00:30.
To find out more you can read the article and watch my exclusive video interview from when we caught up in Annecy earlier this year:
The full interview will be included as part of an upcoming Skwigly video special, so watch this space for more on that before the end of the year.
Posted by Struwwelpeter at 17:25 No comments:

Squeezing All The Goodness In

It's been many moons since I last updated my showreel, being distracted by the very employment it led to. Deep, eh?
I may have also been distracted by Breaking Bad a little bit. And, far more alarmingly, Catfish. But I'm all out of episodes for both, so unless I overcome my violent aversion to the voice of the narrator and fall into a destructive spiral of Come Dine With Me reruns, my time has freed up a bit.
The last few years I've updated the same reel by swapping old, ropey footage for new, swanky footage, keeping the main structure intact. Having been assured by many previous and prospective employers alike that it was overlong by at least a minute, this time around I redid the entire reel from scratch to get a concentrated 90 seconds of my absolute favourite shots:

Consequently I had to be pretty ruthless, and a lot of the earlier films of mine - House Guest, Ground Running, The Naughty List and my ode to Opie & Anthony Chicken Chokes You - have been whittled down to a few seconds of footage each - ol' zombie duck barely gets a look-in nowadays. After a hideous commission that started the year off (represented above only with a fleeting, modified shot of a cat running - nothing else from that doomed project need ever see the light of day) I've had a pretty good year of short commercial projects as well as the ongoing HuHa webisodes which, coupled with my love affair with Toon Boom, have been a great shot in the arm and give the reel a lot more stylistic range. Other projects thrown in the mix include work for Channel 4, Slurpy Studios, Filmakademie Baden-Württemberg and New Impulse Media. I'm still holding back on the Bullies footage as, even though it's all animated and awaiting a distribution plan of action, for the time being I want to keep it under wraps until the final version's been seen in full at least a couple of times. Some HuHa clips represent the same animation style so it'd be somewhat superfluous anyway.
I also wrote the music specifically for the reel, I wanted something quite punchy with a simple enough 4/4 to make effectively editing the clips a bit easier. At the moment the piece is merely titled "Hire Me Already" and features some nods to a certain band I may have professed to admiring once or twice.
For no other reason than I have a YouTube channel, it's also up on my YouTube channel. So if, for whatever reason, your machine or device or doodad doesn't like Vimeo you can watch it there instead:

Posted by Struwwelpeter at 03:00 No comments:

You look down in the dumps, old friend. As well you should, if things are so dreary that you've come here of all places for distraction. How about a heapin' helpin' o' HuHa to perk you up, misery-tits?
Episode 9 of Wobble Box went up earlier this week, my wee contributions to which being the deoderant (1:01 in) and escalator (2:09 in) skits.
The former was an entirely Toon Boom affair, including the backgrounds which I kept loose'n'colourful'n'simple. 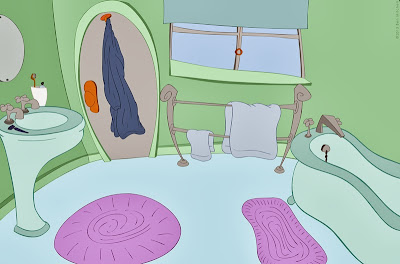 As per there was a lot of fun design work coupled with minimal animation. Get some sketches down ya: 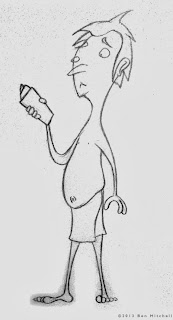 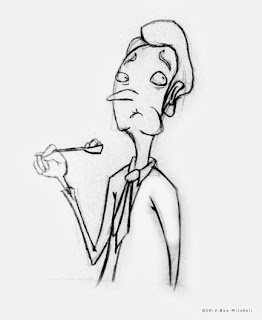 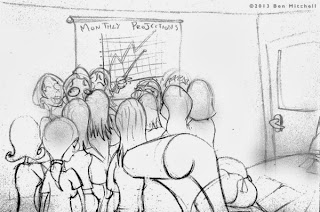 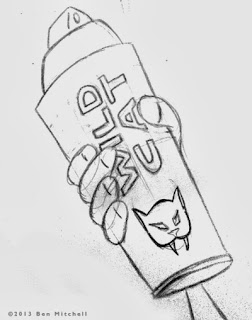 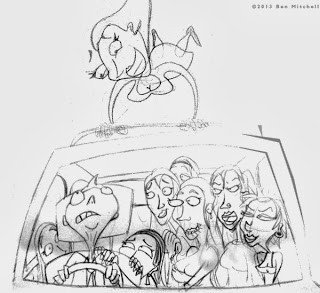 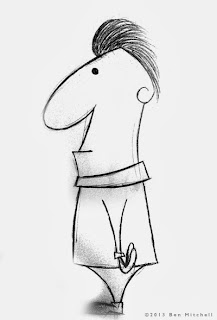 That last one is for the escalator bit, the assets for which were also done in Toon Boom. I wanted to do something less identifiable as my style and so went with something more cartoon-modern. 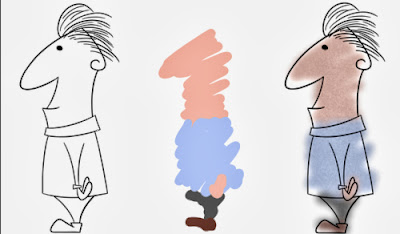 The colour approach was thought up on the fly - rather than solid colours I scribbled them in on their own layers on a boil, exporting them separately from the character animation before compositing both with textures in After Effects. 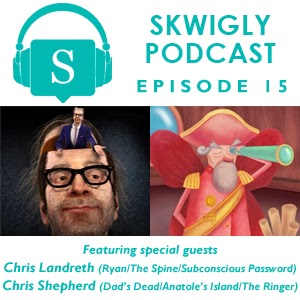 Over in Skwigly land we have a new podcast after yet another unexpected hiatus. There was one scheduled for September but we hit our first genuine snafu when our lead guest inexplicably rescinded permission to be included. First time for everything, I suppose.
Far better sports are Chris Landreth - the Oscar-winning NFB director known for Ryan, The Spine and now Subconscious Password, a wonderfully-relatable tale of a man's inner turmoil as he struggles to recall the name of an old acquaintance he's bumped into at a party - and Chris Shepherd, the chap behind the much-loved shorts Dad's Dead and Who I Am and What I Want among others. Shepherd has recently been involved with 12foot6, Random Acts and Autour de Minuit, the latter for his new live-action/rotoscoped short The Ringer, a genuinely touching father-son tale and one of my favourites from this year's Encounters.
Thrown in the mix are musings on shows like The Simpsons outstaying their welcome, general Encounters chitchat and my usual sanctimonious pontifications on filmmaking. You can do the streaming/subscribing/downloading thang at your leisure and discretion. Whichever option suits you best. There are no judgements here.

Posted by Struwwelpeter at 06:21 No comments: