Where am I? And how can I leave? 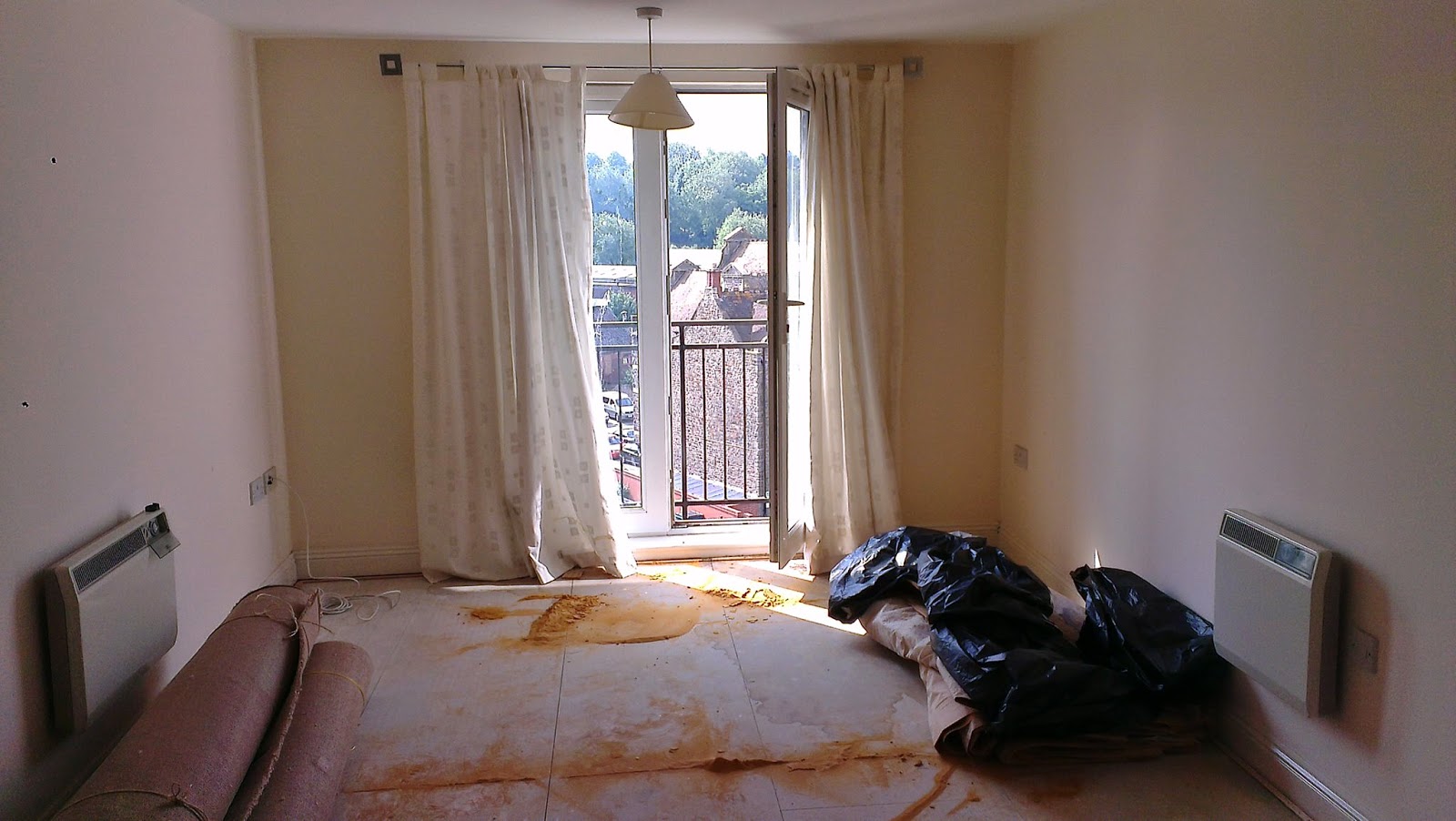 Criminey, a month-plus of radio silence. Surely bliss for the blogosphere?
Well, here I am again. Reconcile yourself with that and tough it out, friends.
The end of this week should mark a return to a life where I have more time available in the day than the scant few minutes in which to graze or micturate the last couple of months have allowed. On top of animation work I've been dealing with all sorts of exciting Skwigly diddlywotsits, unnecessary Throat (the book, not my actual throat) concerns, organising some special music events and the most needlessly protracted flatmove imaginable - especially considering it's within the same building. On top of all this I've also been in the final stages of getting something I'll refer to as "Project Group-Hug" off the ground. Based on a meeting I had last week things are looking good and, if it happens, it'll be something pretty damned amazing, so think warm gooey thoughts and spray them in my general direction.
Going back to the Skwigly diddlywotsits, here's a round-up:
Myself and Laura-Beth went over to Annecy the other week for the Sunniest Animation Festival Ever (thank Christ it was by a lake or our UK-acclimated selves would've snapped before the week was through). Predictably it was superb and, while I was a little nonplussed with a good deal of the competition selection, the special events and industry gatherings were spectacular. Stay tuned for some in-depth coverage of new developments from Dreamworks, Disney, the NFB and Cartoon Network to name a few. In the meantime here's some festival coverage to sink your toothies into: 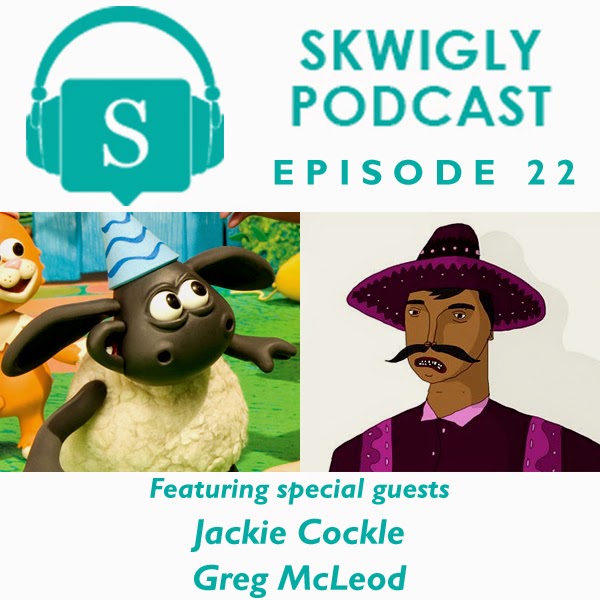 Latest podcast featuring: Greg MacLeod (of the Bros. MacLeod) on his and brother Myles's recent films 365, Isle of Spagg and the upcoming Marfa; Jackie Cockle, whose work as an animator and director spans some of the most prominent stop-motion TV productions in the UK, such as Pingu and Timmy Time. Also included is some of the panel discussion I recently participated in alongside Dani Abram, Jane Davies, Gareth Cavanagh and Kerry Dyer. Download, subscribe and/or stream!
The Lightbox series of mini-docs which started up back in May has been going strong. If you haven't subscribed yet, you can do so here and catch up with what's gone up so far: 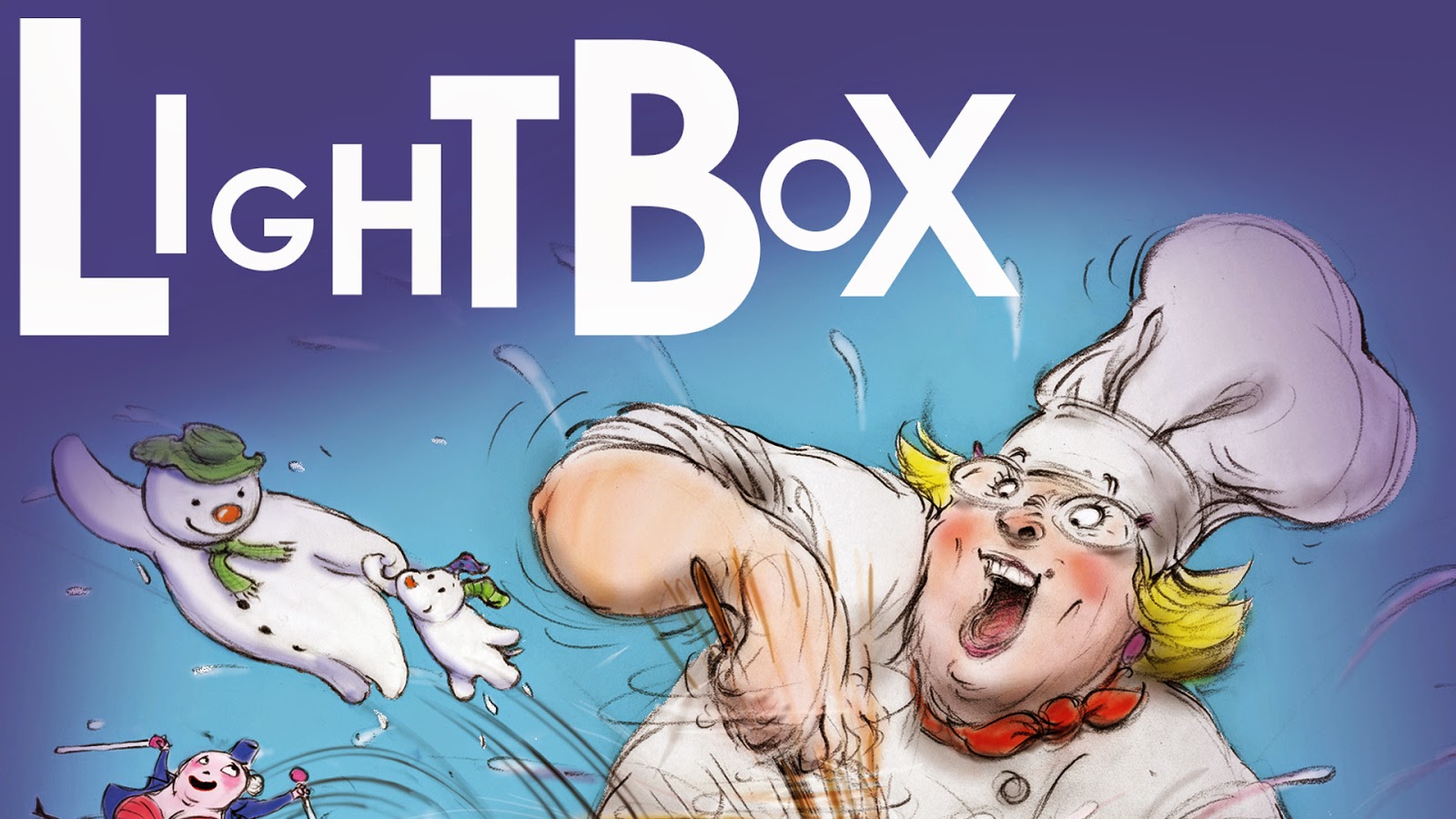 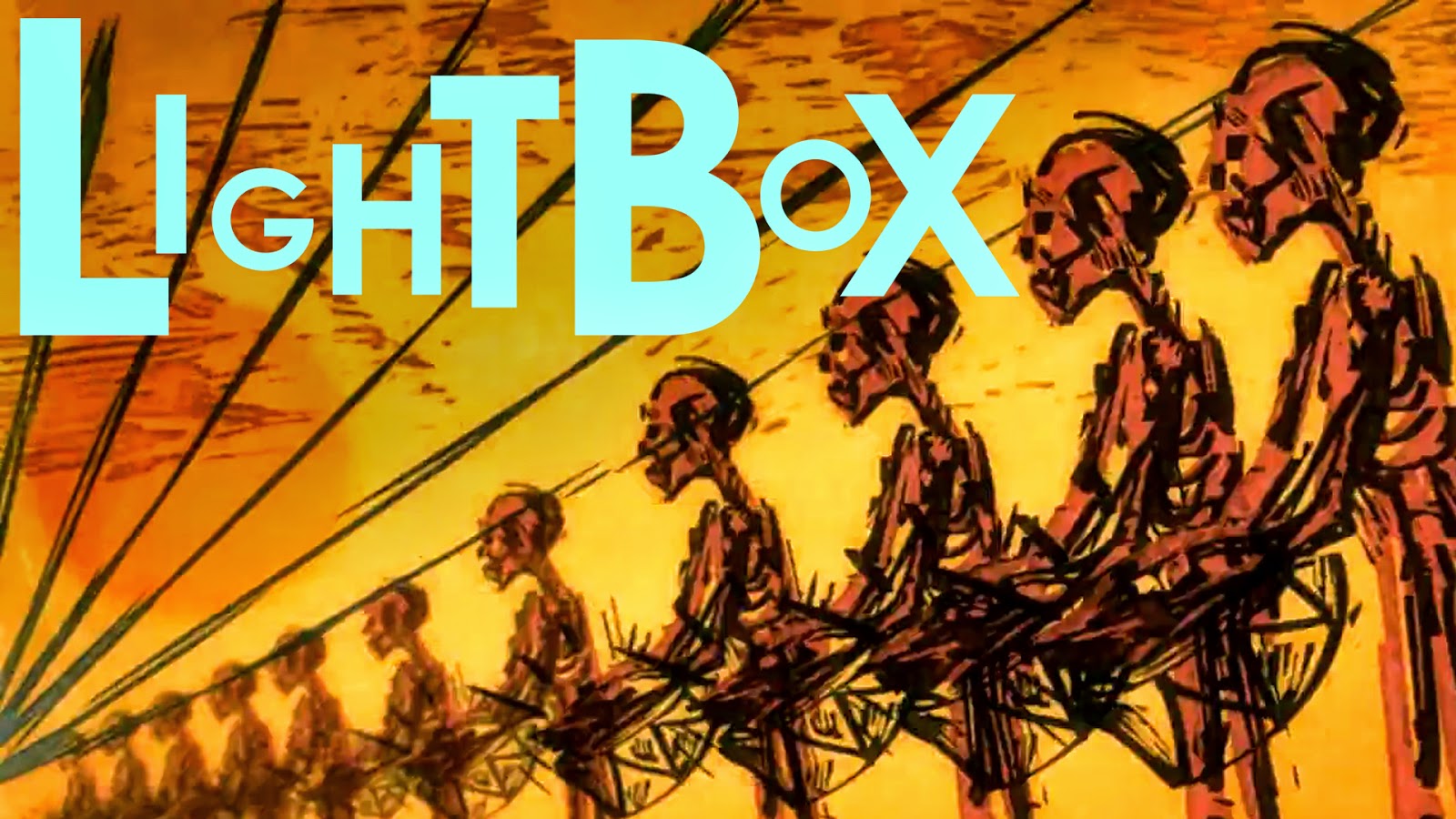 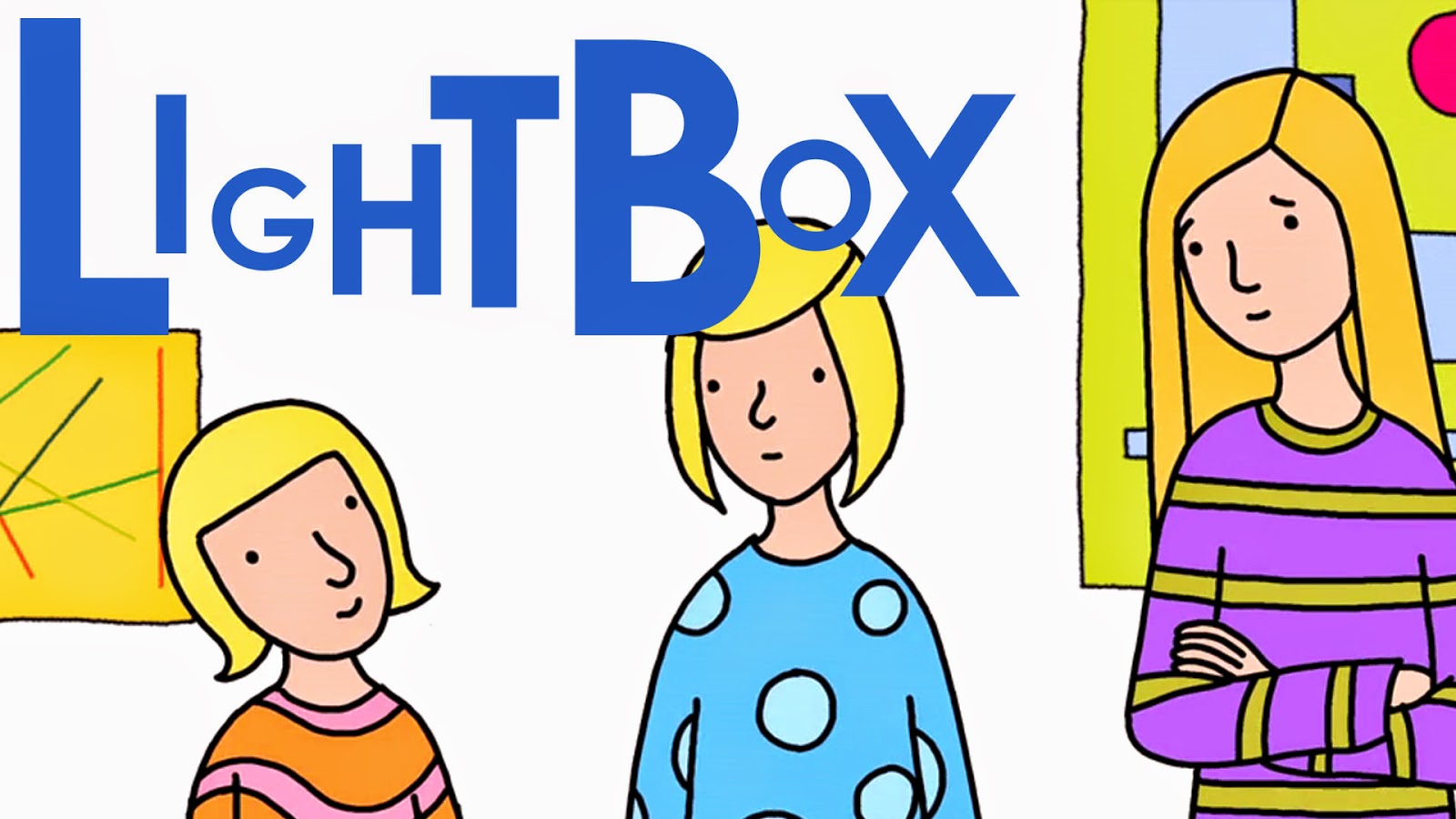 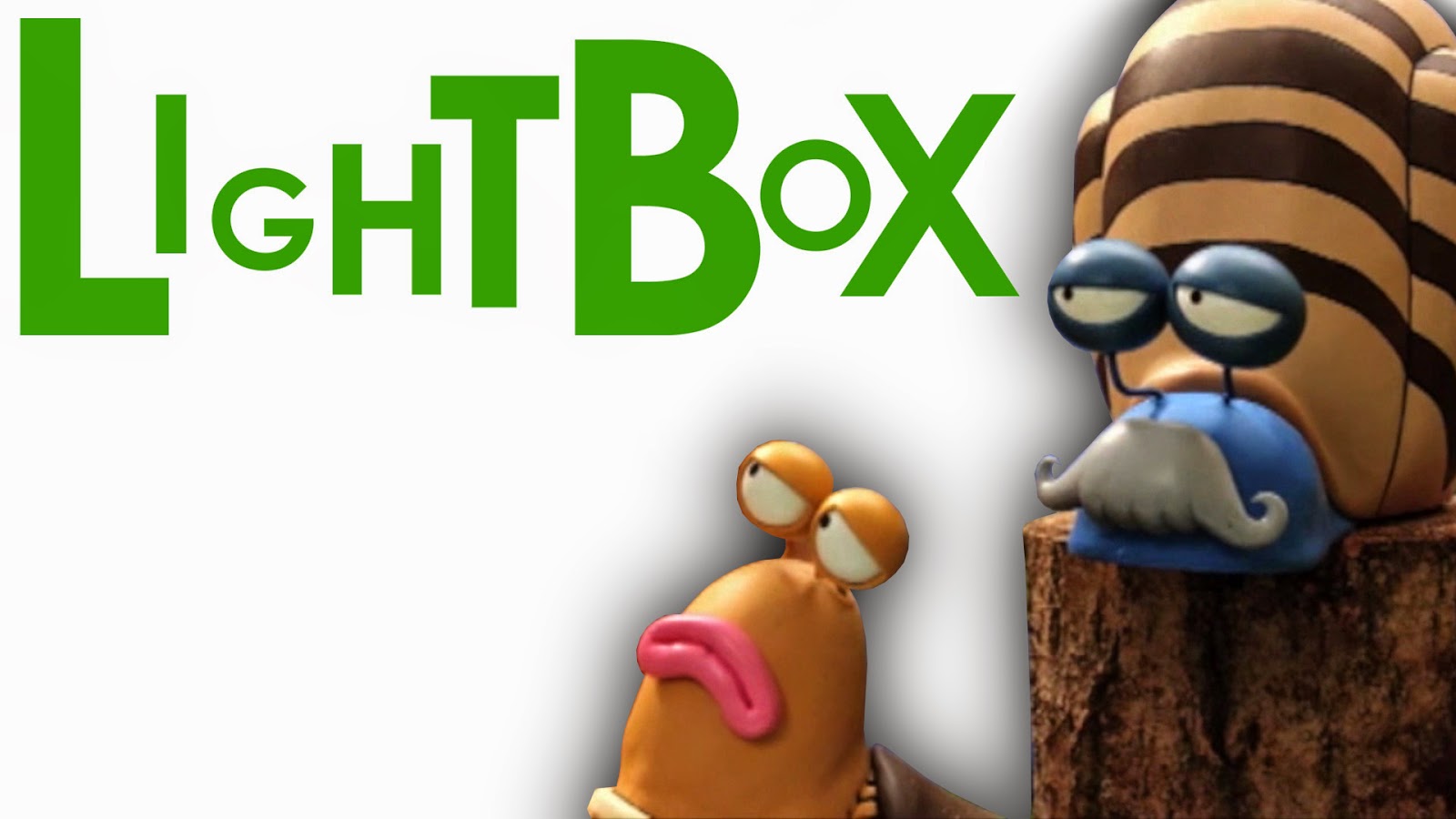 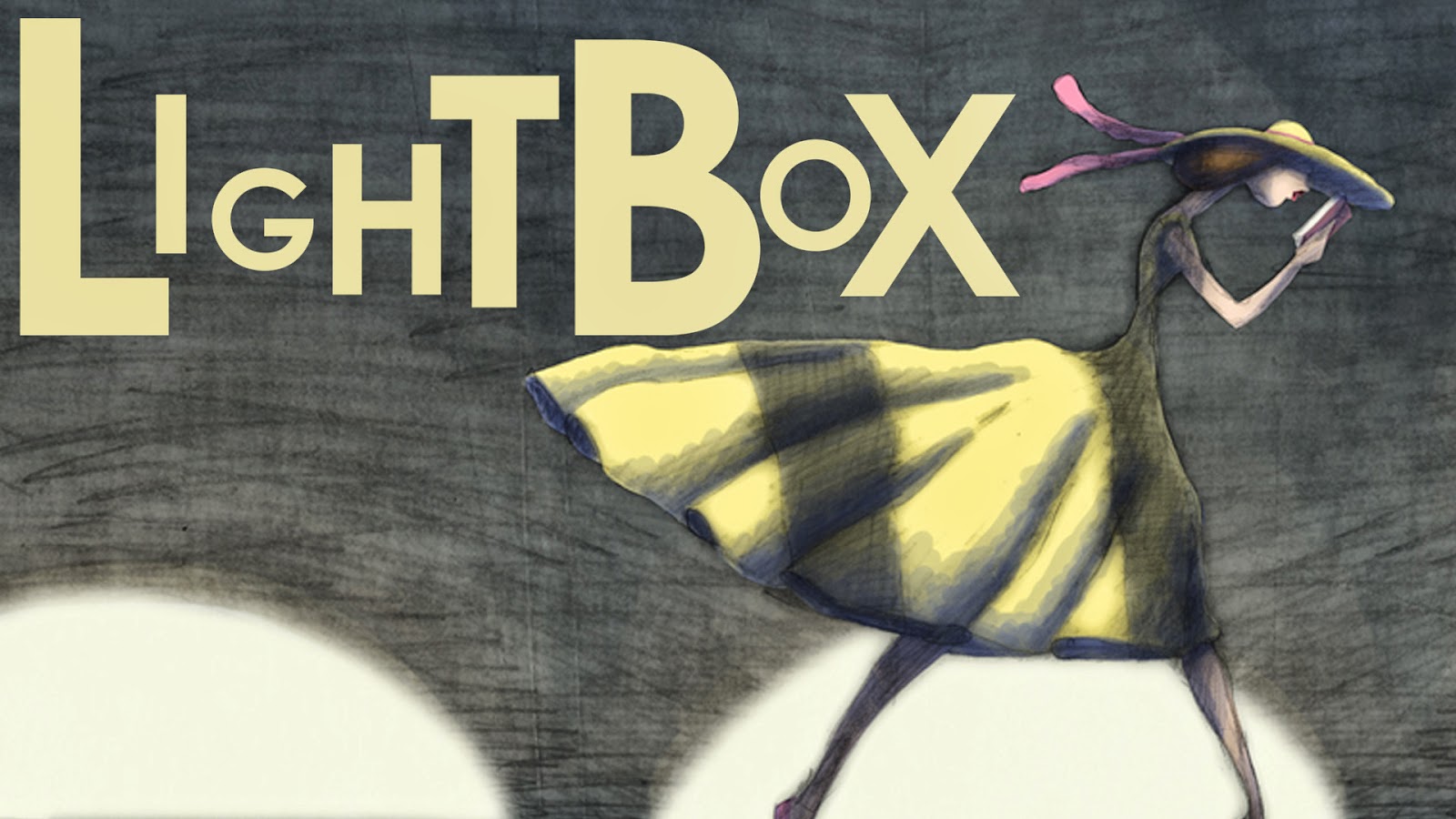 Other new interviews of the written variety include Anita Kwiatkowska-Naqvi, whose pregnancy-themed film Ab Ovo is one of my absolute favourites from the festival circuit last year. Also as part of our Producing Animation series of articles I was able to chat with Annecy's current Artistic Director Marcel Jean on his prior career as an Animation Producer. Some really nice insights here, especially on transitioning from directing to producing.

It's nice to look at the above as some evidence that I have actually been being productive for the last little while. In truth I've been in a bit of a stress blur with the move, and my absence from this blog has been substituted with endless moaning at friends and family with each dull development and setback. What's given me tremendous perspective is just how good I have it as far as support from all directions when seas get choppy. Plus I've lost about 12lbs since I started flathunting, which I guess is a silver-lining. That and the new place is bloody lovely, so I have to concede it really was worth it.
Always darkest before the dawn, and July is also looking to be an exciting month ahead for fanboy reasons. You see, as a longtime David Lynch enthusiast, every two years or so I put myself through the strange dual pleasure/torture of watching a now-very-old show called Twin Peaks. Probably it doesn't need an introduction, it being such a staple of pop culture - it arguably did more for the landscape of television in the 90s than David Chase did with The Sopranos over a decade later. The difference being that, while I can think of *maybe* two episodes of Sopranos that didn't do it for me, at least a third of the episodes of Peaks are borderline unwatchable. It's one of the biggest and most well-known laments of the Lynch fan, that a show which starts off so brilliantly devolves so quickly (in all there are only thirty episodes, the first ten of which are pretty much faultless). 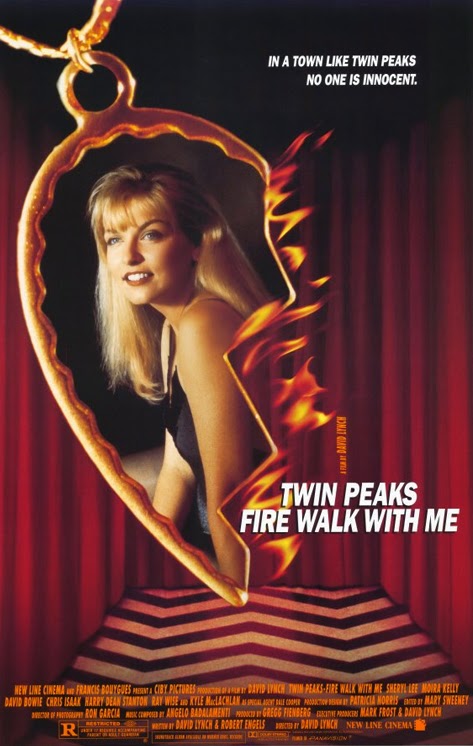 I suppose I'm really more a fan of Fire Walk With Me, the much-maligned movie prequel made after the show which resolves virtually none of the cliffhangers that remained when the series was canceled. Knowing nothing about the premise other than Mike Patton once covered the theme song and that it was a prequel, I figured it'd be a safe bet to start with it and then embark on the show if I liked what I saw. It was 2002 and my Lynch fandom was still in its early stages, you see. Of course, had I known then that the concept of time is treated very loosely in the otherworldly Black Lodge and that its being chronologically a prequel doesn't mean jack shit in terms of fully understanding what's going on - or, more crucially, that the show itself is a goddamned whodunit and so by watching the murder happen beforehand would undermine the whole mystery aspect of the show - I might have tracked down the series first. But then I wonder if I would have liked the film as much that way around, or if I would've even made it past the midway point of season two at all. 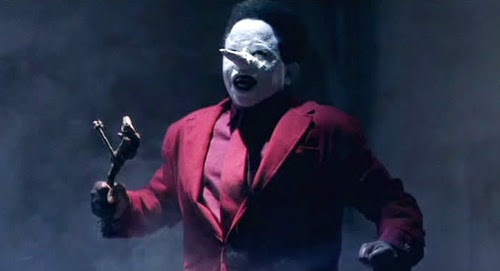 In truth, having not seen the show makes Fire Walk With Me a classic standalone David Lynch film, and easily my favourite. While a lot bears explaining, that's also the case with Lost Highway and Mulhulland Drive and, in the same respect, contributes to its appeal as a film to be dissected and pored over with all the time you thought you'd be spending having sex because, after all, it's your first year in college and you don't assume that the only intermittent play you'll get is from that one recent-divorcee townie wracked with Catholic guilt who you met at such-and-such's house party.
Ah, Gabrielle. I don't want to think too hard about how old she must be now. But I digress. 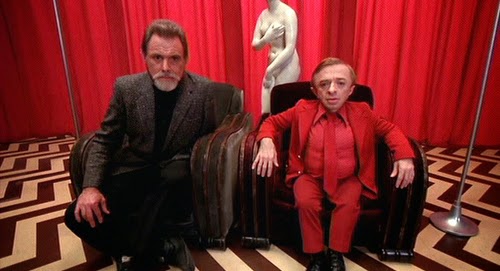 The genius of Fire Walk With Me is that, from a story perspective, it does actually flow perfectly into the events of the show. The pilot episode and first season, while more conventionally structured and far less intense, very much feel like they're carrying on the story, albeit with a sudden change of hairstyles all round. Knowing who the murderer is while everyone else is trying to work it out makes it a satisfying watch for entirely different reasons than it would've been when originally broadcast. A lot of confusing aspects of the film, mainly the backstories of characters we know nothing about having not seen the show are expanded on, though some aren't; A decade later I remain disappointed that Kiefer Sutherland, Chris Isaac, Harry Dean Stanton and David Bowie's characters, all created for FWWM, never show up in the series. It makes the more bafflingly lazy storylines introduced in the later episodes all the more frustrating. Also the frustrations a lot of the fans of the show must have felt when watching the movie can only be appreciated in hindsight; Looking back it must have been a bit jarring that a lot of the main characters - Ben and Audrey Horne, Sherriff Truman, Josie Packard, Pete Martell et al - don't show up at all. Plus one major character is completely redefined when, in FWWM, they commit a murder of their own, one which they're never held accountable for in the series. 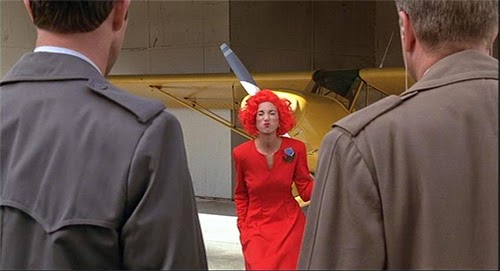 Granted the show does pick up near the end. Were it not for needlessly hammy dialogue and a penchant for pantomimey theatrics, Windom Earle might have had potential as a villain. And the last episode is one of the most amazing things I've seen on television - though it's clearly of its time, nothing has quite matched what Lynch achieved with the Black Lodge sequence. Plus it isn't until the very end that the mythology on which most of FWWM is based is properly introduced. Basically if you threw the whole series into Final Cut, lanced out five or so hours of weak subplots and cheesey moments, you'd have an amazing overall story (surely some geek out there has done this already?).
One of the big white whales for Lynch geeks like me has been the promise that somewhere there exists literally hours of footage shot for FWWM that didn't make it into the final edit, chiefly vignettes involving characters from the series that otherwise don't make an appearance. Various versions of the film's script include these and, overall, it reads like a more cohesive Inland Empire, one bound within the Twin Peaks universe. Omitting the scenes made sense to keep the film about Laura Palmer's battle with the demonic BOB, but for devotees of the show like myself who realistically assumed it wouldn't return, these scenes have been something of a holy grail. Last month, over 11 years after I first became fascinated with the movie (and over twenty for those who were there at the time), this appeared:
I'd always hoped they'd see the light of day but assumed it would be in a dusty, found in a vault somewhere, low-resolution state that most deleted scenes from old movies show up as.
This shit looks fucking amazing.
It's like watching a trailer for an entirely new film in which the main cast have managed to sidestep twenty years of aging (and, in some sad instances, death). And we're being told they've put nearly 90 minutes of it together. I am a happy little cinephile, my friends.
If that weren't enough, something popped up on Twitter last month that got my attention: 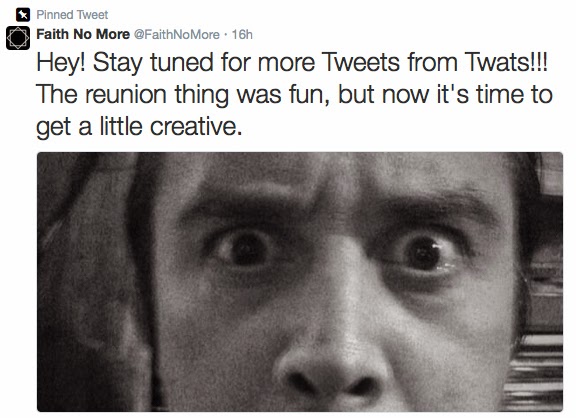 What. The actual fuck. Does THAT mean? I asks ya...
If Faith No More start producing new music (a conclusion I don't want to set myself up for the disappointment of not being the case but that a lot of music news outlets have drawn) the same month that the deleted scenes from Fire Walk With Me are released...holy shit, we could just call it: 2014 wins. It'll be an amazing day regardless but when I see them on 4th there might very well be some indication of what exactly is going on. In the meantime I'm watching their Twitter feed like a fucking hawk.
Posted by Struwwelpeter at 08:50 No comments: