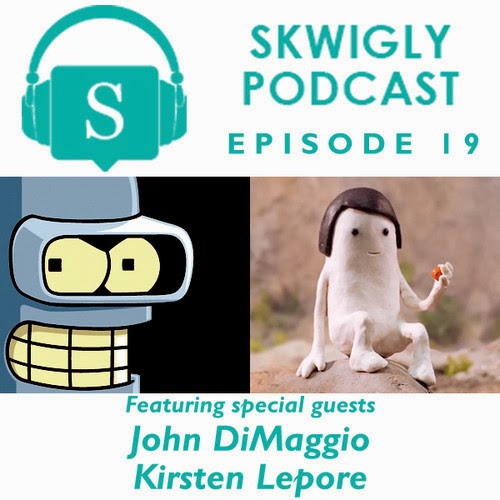 Another good'un, alongside myself and Steve's riveting discussions of crucial industry developments like the Postman Pat movie and a possible Shrek 5, we have two fabulous guests, John DiMaggio (who was Bender off Futurama, currently Jake in Adventure Time) and Laura-Beth chats to "tiny director/animator" Kirsten Lepore. Kirsten directed the fabulous short film Bottle as well as her more recent Move Mountain which was recently released online:

On top of his voice work, John recently produced a documentary on, fittingly, animation voiceover artists. It's called I Know That Voice and looks pretty damn decent, so keep your eyes peeled for it:
The podcast, as always, can be downloaded, streamed and subscribed to and is still cheap as free, so go get it:
This episode is dedicated to Harold Ramis, a fine chap who, along with the likes of James Gandolfini, Patrice o'Neal and Philip Seymour Hoffman, has joined the ranks of too-soon-departed men I never met but admired hugely.

Posted by Struwwelpeter at 11:33 No comments:

A series of Skwigly articles I've never brought up here were revived yesterday. They're basically unnecessary critiques of old shows from my youth that have long-since left the airwaves. It's not exactly the most hard-hitting coverage as far as Skwigly goes but they're fun to write. From this point on I want to try and do them more regularly, in the meantime here are the first four:

Posted by Struwwelpeter at 09:37 No comments: