For the Arthouse Crowd

I'm chin-deep in Encounters festival coverage this week, so here's a special cultural treat for you - the entire series of Wobble Box (so far and with the odd exception of episode 5) en français!
Mais oui!
Eez it not très belle?

If all the above awesomeness is too much to handle here are a couple of bits I animated on their lonesome:

Posted by Struwwelpeter at 03:00 No comments:

With this year barreling by at a scrotum-tighteningly terrifying speed, I keep falling behind with the whole blogging thang. Currently my existence is an impenetrable soup of what's happened/what hasn't, what's online/what's not, what's public/what's private etc, so it can all get away from me a bit. I'm gonna be 30 in a few seconds so give me a break.
There've been a few HuHa! updates in the last couple months worth rounding up. Firstly the plucky Assassinen Babies (as they're known in Germany) make an appearance on their own in a standalone version of their debut skit. Those who speak the language will gather from the comments that its whimsical subtlety didn't play quite as well to the German YouTube crowd.

There's also the French version, Bébés Assassins. Good god, it's like Muzzy up in here.

To an altogether more positive reception here on their home turf, the English Assassin Babies made their thrilling return to Wobble Box in episode 6. Who knows what peril and adventure they'll face this time around? Find out below (around 2:13 in)!

Here are a few yummy mummies I sketched for it. These are all loosely based on some real-life new mothers I know. From what little time I've spend with their respective young'uns I expect they're just as effective in a combat situation. 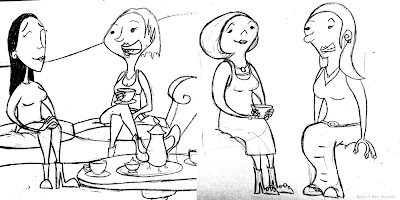 Two more skits I did the visuals for show up in episode 8 which went up today. Starting with High Seas which is a fun, concentrated 15 seconds of swashbuckling that was a joy to design.

I liked how this one came out so much I took the assets and made an illustration piece out of it. What an onanistic delight I am: 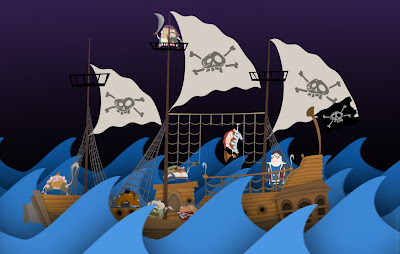 Secondly is High Winds. That's wordplay humour, son, let it wash over you. Like the pirate one, this was quite simplistically animated with some special sauce courtesy of After Effects.
The skits show up at 0:36 and 1:53 respectively, but why not go ahead and watch the whole ep? It's only wee, sure it is.

There's also a more recent episode of Fantasy Office, which saw me charged with designing some 'Salesman D-bags'. The main antagonist was loosely modeled on Michael Douglas in Wall Street. 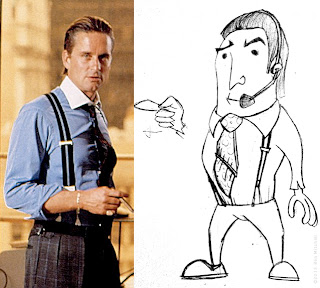 Check out the full episode here:


Also, as I don't want to leave what I'm certain is a monstrously high percentage of this blog's readers who live in France hanging, you can watch the French translation L'Office de la Fantaisie episodes 2 and 3 below:


Hourra!!
Posted by Struwwelpeter at 09:00 No comments:

I don't usually post commercial work up on here but I'm rather fond of the way this recent one came out. Put together by the lovely folks over at Slurpy Studios, it was designed and composited by Katie Steed with character animation by yours truly.


I can't speak for the the service the company being advertised provide but I'm sure they're fine, upstanding chaps and chapettes. I mean, they work in insurance so they'd have to be, right?
Posted by Struwwelpeter at 04:58 No comments: