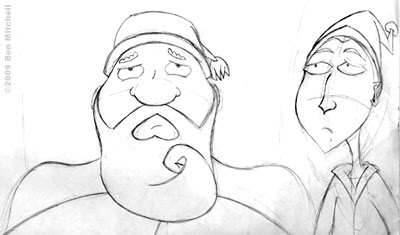 The film has two characters, a traditional-ish Santa and Elf, both voiced by me for economic reasons. I don't think I'm a dreadful voice actor but I certainly don't have the ability to play two characters and not have it be obvious that their source is the same person. Mel Blanc I ain't. Thus I've used the Trey & Matt cheat device of digitally pitching up the Elf voice and pitching down the Santa voice. In both instances the effect is applied moderately but enough to give some necessary distinction. Here's a tiny snippet to show what I mean:
The other issue is that I'm a total mushmouth, so hopefully not that many people will pick up on both characters having the same lisp.
Now that each shot is timed out I'm eager to break out some dope sheets and start work. The time-consuming nature of animation is such that it's an ideal distraction from being sick so I'm hoping to use this time as best I can. Otherwise, let's face facts, I'd just be looking at a fortnight of nonstop onanism. At my age that's finally starting to lose its novelty value.
And on that unnecessarily unsettling note I bid you adieu.
Posted by Struwwelpeter at 04:33