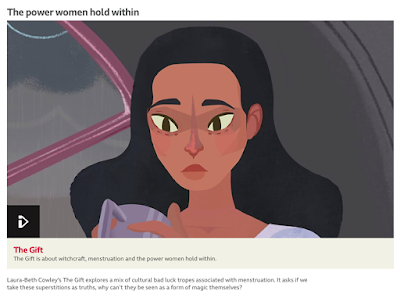 As the world is generally moving a little slower these days I inevitably have less to post about, but this week's seen a bit of a clump of nifty updates I can share. Firstly the amazing Laura-Beth Cowley's latest film The Gift (made last year with Calling the Shots/BBC Arts and on which I was privileged to contribute some animation and sound) will be getting its broadcast premiere this Sunday evening on BBC as part of a special BBC Introducing Arts programme Get Animated! You can get a sneaky preview of what to expect here and be sure to tune in to BBC4 at 10:55pm to catch it - it'll also be available on BBC iPlayer afterwards.
After a long period of radio silence following its much-loved festival run, there are some rumblings of activity coming from the Chuck Steel: Night of the Trampires camp in the form of a newly-revamped website for production studio Animortal and a recently-released behind-the-scenes featurette on the film itself. Have a gander above to see some of the incredible work that went into it (you may even catch a little breakdown of my own contributions to the VFX and compositing at around the 3:20 mark). Fingers crossed we'll hear some word of a release in the near future...

Meanwhile the wonderful Stuttgart Festival of Animated Film has, like many events for the foreseeable future, migrated its programme to a special online edition running from May 5th-10th. Having been involved in the festival as both press and as a filmmaker in the past I had been set to attend in a third capacity, this time as part of the International Competition Jury - but alas, I ain't goin' nowhere. We will, however, be convening online and I can assuredly say this year's selection of films is a uniquely strong and consistent cross-section of some of the best work around and I can't recommend checking this online iteration out enough. You can find out more info here but in short there are three options for experiencing the festival - a free edition, equivalent to their open-air Festival on Schlossplatz; streaming access to the entire official selection for 9.99€; and, for professionals, the Pro edition grants digital access to an assortment of masterclasses, presentations and the complete animated video market for 19.99€. When you think of what you're saving on air fare and accommodation it really is a steal, so check out the festival website for more info.

If life durin' lockdown is starting to drag you might want to get yourselves caught up on our new Skwigly podcast series Skwigly Film Club in which myself, Steve, Laura-Beth and possibly others down the line babble over a variety of animated feature films. Since we launched it a few weeks back with Don Hertzfeldt's It's Such a Beautiful Day we've since hit play on Adam Elliot's Mary and Max, Claude Barras's My Life as a Courgette (or Zucchini, depending on which side of the pond you're on) and Gerald Potterton's Heavy Metal. I'm sure episodes to come will be even more diverse and if anyone wants to weigh in with their suggestions, thoughts, memories and suchlike be sure to keep in touch via our Twitter and Facebook as the series continues.
Posted by Struwwelpeter at 09:30