Part of CGI's major appeal as a viable prospective option is the freedom it can grant with the construction of sets. A huge money-saver when put up against stop-motion which would warrant an actual physical construction, and far more likely to look satisfying over my shambolic, proportionless 2D drawings (see 'Concept Art'). Even if I decide to use traditional/digital 'cel' animation for the characters, a single set built in a CG environment can allow for multiple angles and camera/lighting effects without requiring a buttload of drawings that would probably look pretty ropey anyway.
The first step in putting the cabin (where the bulk of the action takes place) together is mapping out a basic layout that can work with the script. So for example, if a character emerges from a certain room, it needs to be adjacent to the primary setting of the scene. After a number of read-throughs of the script, I came up with this illegible drivel: 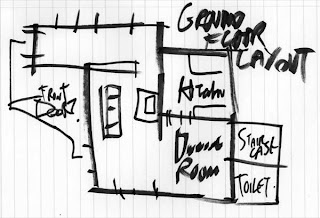 With some fine-tuning I worked out a better-proportioned scale layout, then used that as the foundation for my set. 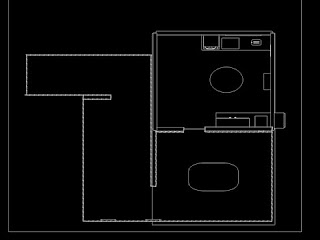 To give it a kind of rustic look, I lined the walls (save for the kitchen which will be tiled) with rows of parallel boards, each at a slight slant.
I then scoured a handful of free stock-image galleries and created about 100 different wood textures from photographs of fences and the like. I applied these to each board and presto! A needlessly photorealistic set of walls! 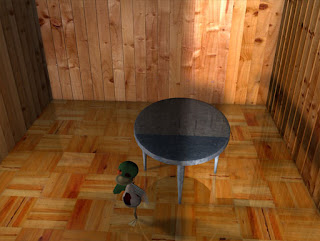 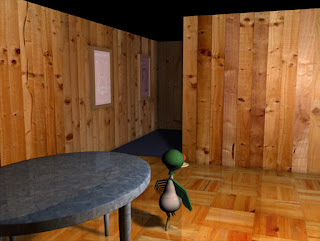 It took a while, but my life is incredibly vacuous. What else was I gonna do? Go out and socialise? Bwahaha...
My major concern is that the fancy-dancy visuals may not be necessary, or may even be distracting. If there's a scene being played out that relies on crucial dialogue, you don't want the audience drooling over the hyper-realism of the background details.

Here's a pretty obvious reference - I remember being astounded by the look of that Final Fantasy film. I can't remember one goddamn thing about what the hell happened in it, though. On one hand, just because you can do something photorealistic doesn't necessarily mean you should. On the other, why the hell not? For now, at least. With the assumption being that the textures and effects can or will be altered later, I think it'd be a good idea to soldier on with the rest of the set as I have done so far. If nothing else, it will teach me more about modelling, and the more mistakes I can learn from, the better. Plus, it passes the time and is genuinely fun once you get into it, working on textures, mapping them in, all that geeky shit. In fact, I think my next entry should be about just how professional things like textures and lighting effects can make films look (in lieu of any decent knowledge of animation) and how easy it is to get caught up in them.

Posted by Struwwelpeter at 11:08

People should read this.