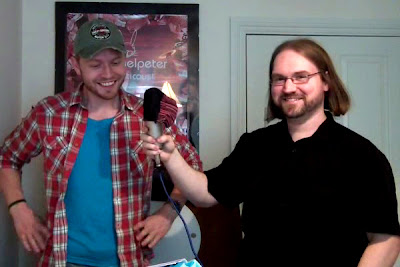 The last few days have been spent putting together a rough dialogue record for "Bullies", which has led to the crushing revelation that the film as it presently exists is TWENTY-FIVE minutes in length. Fucky-fuck-fuck. And, might I add, a fuckity-fuckeroo.
That's actually not so much a concern as far as the production goes - "House Guest" was originally eighteen minutes and took about six months to produce, including the trial and error of cutting my teeth on the software and a more laborious overall animation style. The issue is that longer animated shorts just don't do as well. Sales agents and the festival circuit tend to like their films short and punchy. The exceptions tend to be the types of films that break new ground or just massive studio productions. Mine ticks neither box, so unless Aardman want to pick up the rights (Hinty-McHint) I'm in a lickle quandary.
That aside, I'm really happy with the way the recording went. I may have to redo it more professionally down the line, but for the purposes of an animatic it came off quite well. Here you can see me step up to the plate as a mic stand on top of my directorial duties:

The guy playing Liam is my old school friend Chris Richardson, which is apt as it's a film about old school friends reuniting. Also Chris has pretty decent acting chops, which is kind of important when it comes to, well, acting. We first met at school where him and a couple other kids would record skits impersonating members of staff with eerie precision. They were calamitous, indecipherable at times and frequently abandoned at the midway point due to constant corpsing. But motherfuck, they were funny. 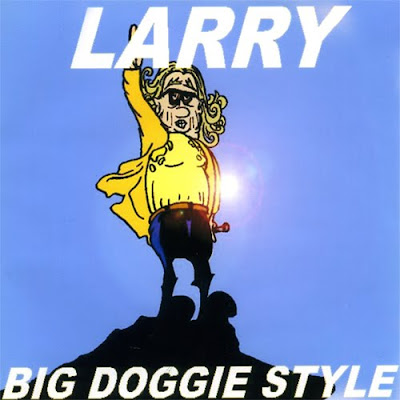 The Larry Soundtrack, for which I designed the cover. Trust me, it both made perfect sense and was incredibly witty back in 2000

I kept trying to insinuate myself into the process, encouraging them to do it professionally in a way that I could make marketable. Even at fifteen I was a fiscally conscious executive douchebag at heart. Fortunately they smelled my despicable agenda a mile away and wouldn't have any of it. But now the tables have a-turned!
In a slightly more professional environment (note the use of an actual pop shield in lieu of an unwashed sock - and they say Kubrick gave his performers shit) I recorded my dialogue separately, on my lonesome which made for a strangely schizophrenic experience:

So, with altogether too much material to work with, the film's preproduction is pretty much done. Sumbitch, I may just end up pulling this off. If I can decide which region of Ireland my character's meant to be from...
Posted by Struwwelpeter at 14:57