The other day, in anticipation of my landlord's annual visit, I decided to tidy up the apartment and at one point found myself dusting my cenobites. That's not a euphemism for anything, rather a declaration of my utter geekdom. Observe: 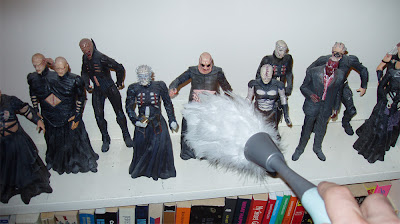 This is who I am - a man painfully close to 30 who not only keeps toys, but displays them and keeps them clean. A man who buys vinyl records just because they're great big versions of albums I already own and like. A man who has developed legitimate objectophilia toward his Wacom Cintiq. A man who, in the past fortnight, has watched every episode of "Dinosaurs" on DVD. And a man who, yesterday, went all the way to London to be photographed with some cult celebrities. In much the same way as an infant gets their picture taken with Santa Claus at the mall. The experience really makes me think more people should embrace the geek within, because oftentimes it can be a fucking blast.
The event in question was the London Film & Comic Con, which I visited as part of my 'research-into-marketing-my-own-books-but-really-just-an-excuse-to-geek-the-fuck-out' endeavours. Lots of people I'm into were there so it made for a pretty awesome trip. 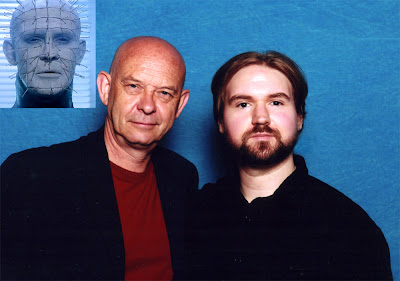 First off there was Doug Bradley, who I've actually met before but as I've shed 100+lbs since then I wanted to get a better pic. Doug is mainly known as Pinhead (the leader of those toys I was dusting up there) from the "Hellraiser" movies. I'm actually not a big horror fan but I always liked Pinhead - he just struck me as classy, kind of like the Frasier Crane of movie monsters. 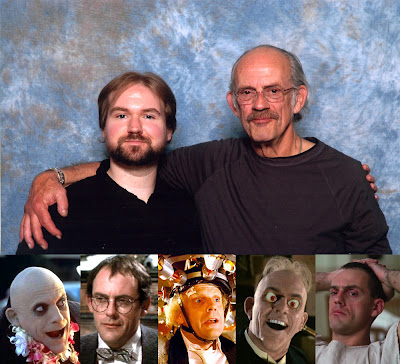 Then the face of my fondest childhood movie memories, Christopher Lloyd, which I think even the most adamant non-geek would struggle to turn down an opportunity to meet. Between Doc Brown, Professor Plum, Uncle Fester and Judge Doom he's already one of my favourite character actors in the world, plus "Things To Do In Denver When You're Dead" and "One Flew Over The Cuckoo's Nest" are two of my favourite films as an adult, and he was fantastic in both of those. 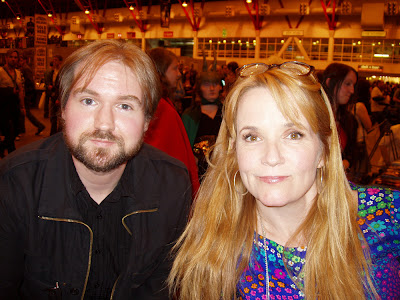 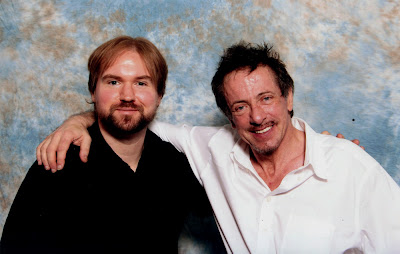 The crème de la wotsit had to be, without a shadow of a doubt, author/artist/director Clive Barker, a man who I'm literally somewhat in love with. He's not a presence in animation as such (though he's been at the helm of some fantastic video games and graphic novels) - as a storyteller though he's 90% responsible for why I do what I do...far less competently than him, admittedly. But as a creative force he has been a tremendous influence and I probably would never have pursued the career I'm in now were it not for him. He's come up from time to time on this blog, but one day soon I'll write up a proper asskissey post.
As well as being incredibly gracious and funny, he spent the day signing autographs with an injured hand which was, frankly, above and beyond the call. They say you shouldn't meet your heroes to avoid being disappointed. Whoever 'they' are should have been a Clive Barker fan, because now I've met him in person I admire him twice as much. 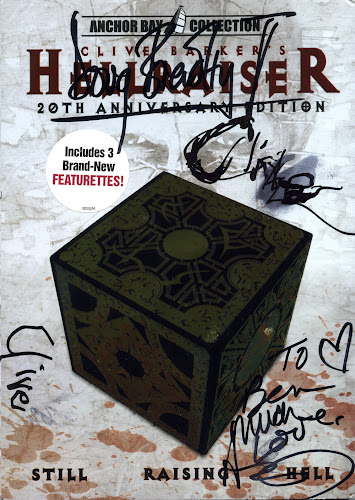 Ashley Laurence (also of "Hellraiser") was there too and as well as helping to fill in my DVD cover o' autographs she could be one of the nicest women alive. Granted, that's based on an accumulative five minutes of interaction but I'm a fantastic judge of character (as my adorable new pen-pal Casey Anthony would agree).
So I'm flying pretty high right now. I owe a huge debt of gratitude to the amazing Negshin who was exhibiting and got me passed the queues so as not to miss my photo shoots. Without her the day would've been thrown completely out of whack and more or less ruined, so she's pretty much my favourite person in the world today. Go to her site and buy some prints, why don'cha? Or check out this film she co-wrote and give it some love:
Posted by Struwwelpeter at 06:19