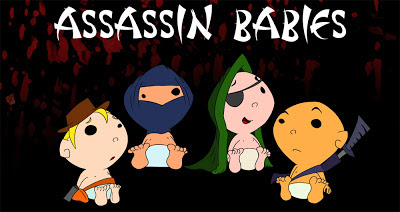 I'm briefly emerging from the subterranean land of Worst-Flu-Ever-meets-Most-Stressful-Deadline-Ever to provide some quick cartoonery to ram into your adorable faceholes.
This was a fun little between-commissions commission for one of YouTube's original content channels FlipTV (they who host Carpool, David Mitchell's Soapbox, Simon's Cat and...possibly others) whose latest sub-channel HuHa! is being headed up by Jonti Picking and Sarah Darling of Weebl's Stuff. Basically it's a way to get out a bunch of animated webisodes and original content to that oh-so-cynical of crowds: The YouTube audience. But so far the response has been very strong. Weebl is already a pretty established name as far as online animation goes so them's some fine coattails to ride.
My first contribution is the mini-skit "Assassin Babies" for the debut episode of their sketch show "Wobble Box". It was written by Sarah Darling while I took on all the visual stuff - character designs, storyboards, animation etc. They also wound up using what I'd thought would be a placeholder audio track so the sound and voice is me too. What a little showoff I am.
You can watch episode 1 of "Wobble Box" right here. My bit's around 23 seconds in. Other bits I didn't do but am rather fond of include "Unrealistic Dog" and "Mr. Bubblehead".
Here's some development scribbles and whatnot:
Knock wood when I get my evenings and weekends back I can do more for HuHa! I have a particular fondness for anything named after any inexplicable noise Al Pacino's been known to make.
Posted by Struwwelpeter at 18:30