'Cocky cockerel cuckolding' - quite proud of that one... 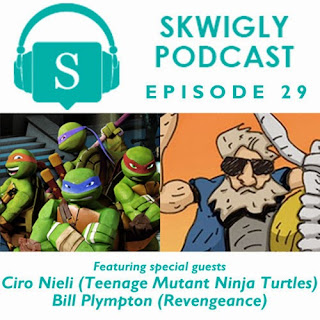 The latest podcast is now up! It's been a while but this will hopefully be worth the wait. It features the usual blather-on between myself and Steve on recent and upcoming Skwigly events, gushing over the new Don Hertzfeldt film and the glut of remakes this year has brought. In keeping with the latter I also chat to Ciro Nieli, the Exec Producer on Nickelodeon's Teenage Mutant Ninja Turtles, the franchise that simply cannot die. Plus my indie hero Bill Plympton joins us again to discuss Revengeance (yet another feature film he's directing, this time in collaboration with writer and fellow indie animator Jim Lujan) and the mockumentary Hitler's Folly. Good stuff all round, so treat yisselfs and stream, download or subscribe away:
It's been a while since the last one, and realistically speaking it's getting less and less tenable to keep doing these podcasts in the same way I've done since I started three years back when both Steve and I didn't have quite so much on our plates. That isn't to say it's going away any time soon - if anything it'll be more of a frequent thing, albeit streamlined. But I'd like to do one more in the 'traditional' format and get us up to thirty before mixing things up a bit.
Also up this week is an interview with Tom Schroeder, whose magnificent animated film work includes Marcel, King of Tervuren, a tale of cocky cockerel cuckolding and one of my absolute favourites of 2013. When you've had a read of the interview give the film a watch, it's a good'un:
Posted by Struwwelpeter at 10:54