Gute Nachrichten! My latest film Klementhro will be paddling its way across Germany throughout July as part of the touring programme Shorts Attack, put together by the fine folks at Interfilm. It will play alongside other films linked by the theme 'Travel Stories' by such excellent directors as Fluorescent Hill, Mark Lomond, Zsuzsanna Kreif, Borbála Zétényi and Jossie Malis among others. Things kick off this Saturday (July 2nd) 9pm at the UT Connewitz venue in Leipzig, followed by three simultaneous screenings on Wednesday July 6th at the Kinobar Prager Frühling (8:30pm, again in Leipzig), Berlin's Acud Kino (9pm) and the Medienhaus in Hannover (9pm).
Later in the week the programme will play in Hamburg at Filmraum (Saturday July 9th, 8pm) and the following night in München at the Werkstattkino. Check back here for more dates/venues later in the month! 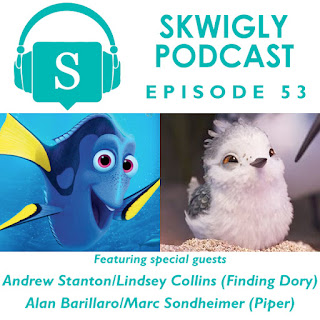 I'm particularly pleased that the film is continuing what's been a long-running and very harmonious relationship between my work and European territories, especially given the recent outcome of the EU referendum that's left a lot of us shaken. In the latest episode of the Skwigly Animation Podcast myself and Steve attempt to make some sense of it all and talk through the potential ramifications Brexit may have on the animation industry should it go forward. If nothing else this is one of the more cathartic episodes we've ever put out. In a sunnier second half we also welcome the talents behind the latest Disney/Pixar box-office smash Finding Dory as well as its accompanying short film Piper, both of which we were able to catch at this year's Annecy festival. Stream below or direct download (of course you can always subscribe and never miss an episode).
Posted by Struwwelpeter at 04:22