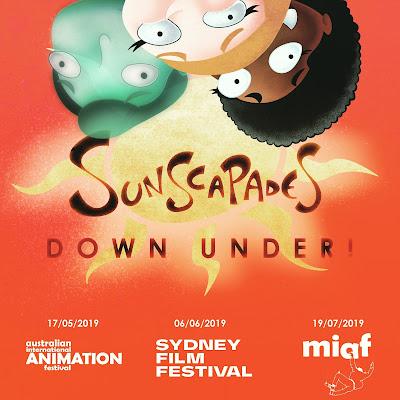 Goin' on tour! Sort of.
As previously mentioned Sunscapades screens 8pm tonight at the Australian International Animation Festival in Wagga Wagga's Forum 6 cinema. Even better news is the Late Night Bizarre programme that the film's a part of will be popping up at two other top-tier Australian fests over the course of the summer.
Next month sees it at the prestigious Sydney Film Festival under the alternate title Animation After Dark. This will be on Thursday June 6th 8:30pm at Dendy Cinemas Newtown.
Then in July it will be at the Melbourne International Animation Festival on the 19th at 9pm. Right now it looks like their site is in a bit of a gestation period but I'm pretty sure the venue for it will be the AMCI.
All three of these have been on my festival wish-list for a good long while so it's a real thrill to be involved. This also signifies a bit of a milestone in my indie filmmaking career that I'll elaborate on in my next post.
Ooh, what a tease I is!
Posted by Struwwelpeter at 08:51