Sunscapades appears to be trundling merrily along with a batch of screening events lined up through the summer. I don't have firm info on all of them yet but there are a couple coming up this month that seem to be set in stone. Firstly it will be screening at the rather magnificent Anifilm International Festival of Animated Films in Třeboň, Czech Republic as part of a special late-night screening (this is becoming a bit of a recurring - and welcome - theme) Midnight Animation: Blood. This will be Friday May 10th 11:30pm at the Světozor Cinema. 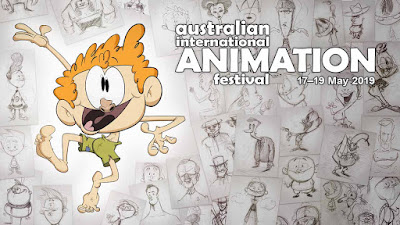 A week later it will be in the similarly-themed Late Night Bizarre programme that takes place during the Australian International Animation Festival, alongside some new work from the likes of Will Anderson, Peter Millard and Jodie Haslam as well as some familiar recent shorts I'm quite fond of such as Lorenz Wunderle's Coyote and recent Skwigly interviewee David Barlow-Krelina's Caterpillarplasty. It looks like a fun one but if you can't make it to Wagga Wagga I get the impression the screening itself will be playing at a couple other fests down under in the near future.

At the end of the month the 15th Detmold Short Film Festival will kick off, assuredly with Sunscapades somewhere among the line-up although no specifics just yet (update to follow). This marks my third inclusion at Detmold following the selection of The Naughty List in 2011 as well as being one of the small handful of fests that gave Ground Running a punt the following year, so I've got a bit of a soft spot for 'em.
Posted by Struwwelpeter at 08:55