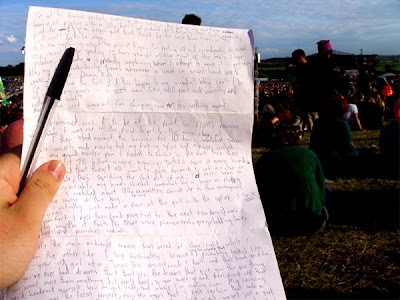 I'm at the Download Festival, scrawling this entry on the back of my coach ticket 'terms of use' printout with a 20p biro I just purchased. It's the only item that's reasonably priced here - for £3 a burger, you'd think they'd be the best in the world, right? Wrong.
Aside from complaining about being ripped-off for sub-par patties, I'm feeling old and curmudgeonly for several other reasons. After spending twelve hours straight at the front of the main stage yesterday, my body is presently complaining when I attempt to move it in any way (like walking, blinking, or breathing in and out). Also, my face involuntarily scowls whenever a waft of second-hand weed smoke hits me. Damn kids.
I'm 25! How the fuck did this happen to me already? Why can't I be old beyond my years in a good way, like, intelligent and worldly and cultured and such?
Ah, the sun just came out. I'm chirpier now for its soothing warmth.
So determined was I to be at the front for Faith No More's reunion show yesterday, I was one of the first to get to the main stage at 11am. I then stood against the barrier for ten hours, watched seven separate concerts and nearly had my fucking ribcage crushed to powder against the metal barrier. See, in my grand master plan I failed to factor in the fact that there would be about seventy-billion angry, heaving, youthful fans of every band playing, and that they'd all want to push forward to get as close as possible, thus squishing the spinal fluid out of me. I'd never been so glad to be overweight, my bones shielded somewhat by a layer of flabby insulation as I watch about a hundred skinny casualties carried off to the emergency tent over the course of the day.
(I actually just made a face at the girl with the spliff. I SUCK. But I digress...)

The discomfort I felt then - and may feel for the next few days - was completely worth it. Faith No More were phenomenal, grey/balding hair, newly-developed paunches and all.
Fortunately the main audience camera was based at stage right, while I was on the other side. I say 'fortunately' because I was so overcome that I probably looked like a twelve-year-old girl at a Jonas Bros concert, and I don't need that visual on film. 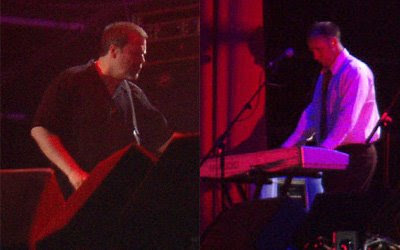 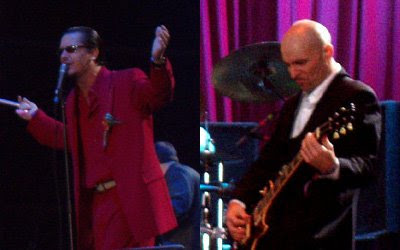 Posted by Struwwelpeter at 06:36