Three of my films - "Ground Running", "The Naughty List" and "Norton & Friends" (my Opie & Anthony mini-short) are getting a rare local screening this coming Tuesday (20th, not the 27th as suggested by the flier below) at CineMe Shorts here in Bristol. It'll also be the first and possibly only time my O&A animation will be seen on a screen bigger than a computer monitor so I'm looking forward to that. 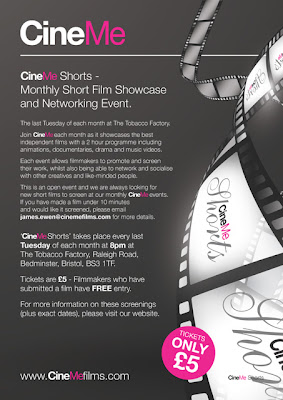 It'll take place at the Tobacco Factory - a fine venue where I frequently go to, amongst other things, draw naked people - at 8pm and tickets are a fiver (more info here). So if you're a local come on down and berate me.

As well as being shown Monday afternoon at 2:05pm, two more confirmed April broadcast slots for "La Lista Traviesa" (the Spanish incarnation of "The Naughty List") will be on Thursday 12th at 2:05am and Thursday 26th and 1:35am over on Canal+ Xtra. So if you overdid the ol' afternoon siesta and can't sleep, give it a watch.
On a completely separate musical note, I've started doing my first live shows of 2012. Nothing worth advertising, just little slots here and there to stay practiced and work out some new material. I've also started recording again and have put online my first studio recording since "The Book of Women". It's kinda different, sort of melancholy country-western-ish, which is something I'd never imagined coming out of me. Give it a listen and, if you like, a free-as-gratis download over at SoundCloud.
High Midnight by Struwwelpeter
Posted by Struwwelpeter at 04:45