...Sort of. Actually the layout's exactly the same, I've just switched up the colour scheme and brought in a new design motif. The ol' pre-"Throat" concept sketch of me on the pishadoo was starting to seem a little out of place now the book's out and the character's technically not supposed to be me.
One of the eighty billion current projects I have on the boil right now is another website redesign that'll hopefully make the accrued creative projects I've put out over the years a little more navigatable and less scattershot. It occurred to me that about half of them have vectorised logos for the purposes of EPKs and similar such promotion, so I've been designing some more for the remaining half. This way each film, album, book or whatever will have its own associated image. A bit like OS application icons or, as a friend pointed out the other night, video game achievements. It's just one of those staples of web design that I never really embraced so figured it'd be worth a shot. No idea when said website will actually manifest itself though, but I expect it'll be far less of an undertaking than my last site overhaul which got a bit out of hand; though fun to do, the pages were so densely packed they each took like a minute to load.
Will keep you posted. It's what I do. 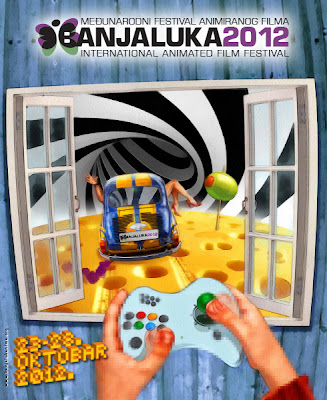 Back in the real world - Bosnia & Herzegovina, to narrow it down a little bit - I'm very chuffed to say that "Ground Running" has been included in the line-up for this year's edition of the Banja Luka International Animated Film Festival. The 2009 edition of the festival threw in my first film "House Guest", and much like I was back then I'm amongst some pretty superb company this year. Other films being screened include "Oh Willy..." (Emma de Swaef & Marc James Roels), "Kuhina" (Joni Männistö), "Luminaris" (Juan Pablo Zaramella) and "Bendito Machine IV" (Jossie Malis), all of which I'm a big fan of. My screening is Competitive Program 1 which will be at 10pm tomorrow, repeated on the 24th at 2pm, both at the Dječije pozorište Children's Theatre. Apologies for the short notice for those of you who are too far away and may have been interested, I didn't get the memo and only just now found out about it by chance. Just in case you're a Bosnian or Herzegovinian (or both, I'm not sure how it works) and fancy giving it a look there's more info here.
Posted by Struwwelpeter at 11:59