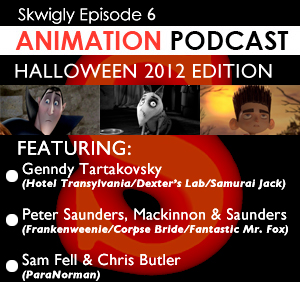 Happy day-of-heightened-spooky-confection-sales, everybody!
We’ve been hard at work over at Skwigly central (a place that doesn’t actually exist outside of this sentence) to spread some cartooney godlessness about the interwebs. We now have episode six of the Skwigly Podcast up and, fittingly, it’s rather Halloween-centric. Courtesy of Steve there are some fantastic interview gets, such as “ParaNorman” directors Sam Fell and Chris Butler as well as Peter Saunders, one half (guess which one) of MacKinnon & Saunders, the amazing puppet-making team behind “Corpse Bride” and, more recently, “Frankenweenie”. Steve also managed to chat with “Hotel Transylvania” director Genndy Tartakovsky, an animation TV legend whose legacy includes “Dexter’s Lab”, “Powerpuff Girls” and “Samurai Jack”, three shows that, though I didn’t discover them until I was in my later teens, were the shiznit. I think all told this is one of the best episodes we’ve done and I’m pretty excited with the direction things are going. Listen below and don’t forget the subscribe on iTunes!
Skwigly Podcast 06 (Halloween 2012) - Genndy Tartakovsky, Peter Saunders, Chris Butler & Sam Fell by Skwigly Animation Podcast

If you’re still in the Halloween mood but are also itching for some Christmas spirit, you might want to head on over to the Arnos Vale Cemetary in Bristol - 8pm November 2nd - where “The Naughty List” will be showing. It's part of a program put together by CineFeatures, a new initiative for screening indie films that will feature it as a cartoon before the main film “Electric Man”. Just like in the old days!

For the benefit of those of you who paint Spain a light shade of green on this blog’s stat map, “Naughty List” is back on TV again in the graveyard (keeping with the theme I suppose) slot of 3am this coming Monday (12th) on Canal+ Xtra. Better than a kick in the baubles.
Posted by Struwwelpeter at 04:58