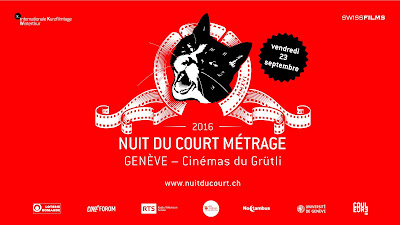 The nomadic Klementhro continues his Swiss travels this weekend as part of the ongoing Nuit du court métrage tour he finds himself on. First stop is Geneva, a city I unexpectedly wound up spending some time in earlier this year when my flight was delayed and I missed my shuttle to Annecy (the full horrorshow was documented in that week's podcast - it turned out to be a luvverly day in the end). Proceedings will kick off at Les Cinémas du Grütli from 8pm on Friday September 23rd.
The following night anyone in or around Delémont may wish to mosey on down to Cinemont and catch the programme there, again beginning at 8pm. Would that I could join old Klem on his travels; at this point he's getting out way more than I am.
That's all I gots for you today, folks. As you were.
Posted by Struwwelpeter at 09:17