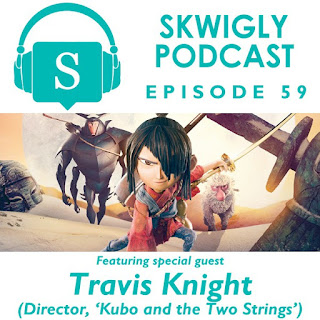 The indefatigable Skwigly Animation Podcast is creeping up to its sixtieth episode, and I'm stoked that in our latest we welcome back LAIKA President and CEO Travis Knight, talking about his directorial debut Kubo and the Two Strings. Granted it's only a slightly longer version of the video interview I posted earlier in the month, but frankly I'm shouting from the rooftops about this film as much as I possibly can.
Also in this episode Steve and I mull over why the film doesn't appear to have gotten as many bums on seats as it should have as well as the various approaches a film's marketing campaign can take, in particular comparing the approaches of Disney's Moana and Dreamworks' Trolls. I also unearth a buried memory of an old animation I've never been able to track down for decades, so give it a listen (or a direct download for later) and see if you can help me out.
Some more animationey goodness to look forward to is the newly-launched programme for the second Manchester Animation Festival. As with its inaugural edition I'll be helping out here and there for a few of the events but here's an overall preview of their programme as broadcast live from their Facebook page earlier this evening:
Before then it's the Encounters festival here in Bristol this week. This year as part of Skwigly's media partnership with the event I'm doing a series of post-screening Q&A sessions that will start going up tomorrow. If you're in town be sure to swing by Waterside 1 at The Watershed immediately after each competition screening, roughly 1:30pm and 7:30pm each day until the end of the week.
Posted by Struwwelpeter at 22:00