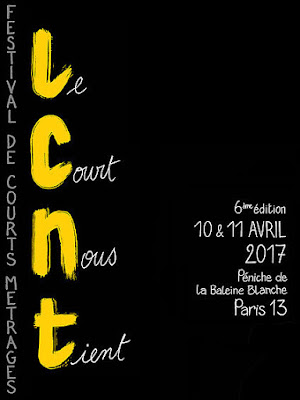 Latest festival updates for Klementhro, the little paddlin' ginger that could (even though nobody asked him to). First off in April you can catch the film in Paris at this year's edition of Le Court Nous Tient. Our man Klementhro will be poking his head out during the Competition 2 screening at 4pm April 11th. In keeping with the quasi-nautical theme of the film the event takes place on La Baleine Blanche. Très bon!

Also an update on the film's participation in the Cardiff Animation Nights competition strand of CIFF in May. In anticipation of the announcement of the full schedule soon, it's looking like Klementhro will play in the Animation 2 screening that will take place on Saturday May 6th around 5:15pm (TBC) at Chapter Arts Centre. Will keep you posted with more events when the time comes, but all told it's shaping up to be another fun weekend.
With Klementhro soon to be old news, here's the YouTube version of the Sunscapades clip I put up over the weekend. This is an ever-so-slightly longer excerpt, see if you can spot a line that I've ultimately jettisoned from the final film:

Posted by Struwwelpeter at 02:16