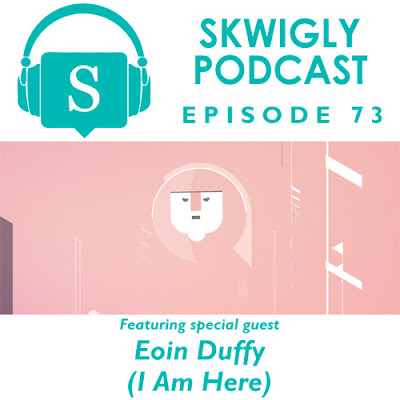 In episode 73 of the Skwigly Animation Podcast - the last episode I will produce as an unmarried man, no less - we welcome Ireland-born, Vancouver-based visual artist Eoin Duffy, director of the National Film Board of Canada short I Am Here.
Having studied Visual Communication at the Dublin Institute of Technology, Eoin’s background in graphic design ultimately led to motion graphics and animation, notable works including his debut 2012 short On Departure with 2014’s The Missing Scarf shortlisted for Best Animated Short at the 86th Academy Awards and nominated for Best Short Film at the 27th European Film Awards.
Produced by Shirley Vercruysse and Maral Mohammadian of the NFB and Executive Produced by Michael Fukushima, the film will screen in competition at this year’s Encounters Short Film & Animation Festival in Bristol as part of the screening Animation 1: Packing A Punch (the same screening will feature Laura-Beth's film Boris-Noris - so be there, god-damn you)
Also discussed in this episode: Aardman‘s first full Early Man trailer, the latest Bertram Fiddle outing from Rumpus Animation and intriguing new goings-on with stop-motion nightmare master Robert Morgan. Stream below or direct download:

Posted by Struwwelpeter at 17:21