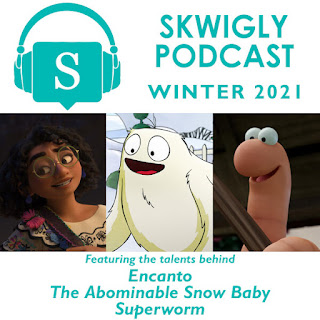 In our final Skwigly Animation Podcast episode of 2021 we're delighted to welcome the teams behind some of this holiday season’s most anticipated animation projects. Our prolific contributor Martyn Warren speaks with Jared Bush and Charise Castro Smith, the directors of Disney's Encanto, as well as the film's producer Clark Spencer. We also welcome Jac Hamman and Sarah Scrimgeour, the directors of Magic Light's latest Julia Donaldson and Axel Scheffler adaptation Superworm which airs 2:30pm Xmas day on BBC1.

Another animated adaptation hitting screens on December 25th is Eagle Eye Drama's take on Terry Pratchett's The Abominable Snow Baby, which airs 7:30pm on Channel 4 following the success of their 2020 animated version of Quentin Blake's Clown; director Massimo Fenati joins us to talk about his career and how the projects came together.

If you're after more holiday viewing then it's worth mentioning that the BBC4 documentary Secrets of British Animation was recently repeated, which means it'll be on the ol' iPlayer for the next few weeks. It's a great (if brief) look at what the UK has brought to the table on the animation front, occasionally interrupted by myself and Steve offering up the odd bon mot here and there, so if you missed it the first time around give it a look-see.

Posted by Struwwelpeter at 02:40