Thought I'd round up a handful of old endeavours I recently gave a bit of spit'n'polish to. Sort of a #ThrowbackThursday thing. Is that still a thing? Probably not. God damn kids and their ephemera.
I'm still quite keen on the idea of re-releasing some of my old albums on Bandcamp now that I'm all nicely situated over there. The challenge is working out how far back into the past I reach before the music gets too embarrassingly awful to share with the world.
Going back to 2008, probably my most obscure music project (in that there were literally only 50 copies ever pressed) was Silverfish, a fairly moody album with some harmonious moments but horribly rushed production. With some proper love and attention I think it'd mostly hold up quite well, so I'm gradually working through the project files and fixing them up. Here's one from this week that finally has some oomph after being long-oomphless:
Flashback a further four years to 2004, here's a somewhat cheerier song I attempted during the sessions for the second Struwwelpeter LP Rapeseed but I could never get a decent end result, mainly down to some horribly out-of-tune guitar parts. Unearthing the old RNS file during a big HD cleanup this week I took a crack at it again in Reason with what I know now and it's finally listenable:
To fully appreciate how much is going into the remixing/remastering, here's a before/after clip that should make the reasons for it going unreleased for so long obvious:

I also found the source video for one of my old BA projects over a decade ago, a music video for the Rapeseed song 'On A Limb' that mainly served as an After Effects experiment combining footage of me in dress-up dancing around like a dick, interspersed with some home movies from the 20s of our place in the Laurentians that a neighbour had come across.
I've updated the Vimeo file with a new HD render, which may seem a bit redundant as it's meant to look old and shitty, so all you get is more highly-defined blurriness. It does significantly lessen the compression artifacts, as this comparison shows: 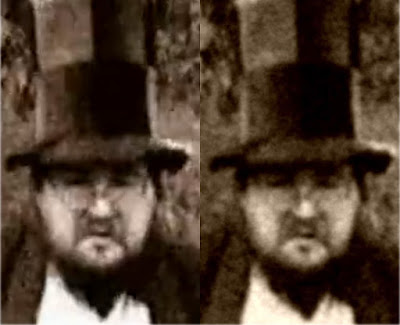 Either way, I never looked better. I'm told by the fine folks at Rumpus that this video was partially responsible for the design of Count Fulchmuckle, one of the characters I voiced in their excellent game The Adventures of Bertram Fiddle.

Posted by Struwwelpeter at 02:22