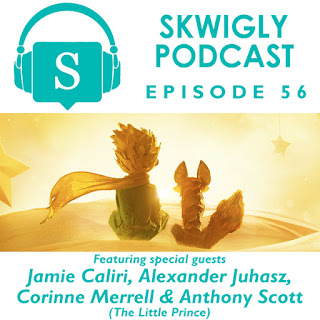 In the latest episode of the Skwigly Animation Podcast Laura-Beth and I meet the team behind the stunning stop-motion sequences of Mark Osborne’s recent animated adaptation The Little Prince:
Anthony Scott (Lead Animator), whose tremendous stop-motion credits include The Nightmare Before Christmas, James and the Giant Peach, Coraline, Corpse Bride and ParaNorman; Corinne Merrell (Art Director), who comes from a background in architecture and stage design and gradually made the move to Art Direction and Production/Set Design for animation, music videos and documentaries; Jamie Caliri (Creative Director) whose animated titles sequence for Lemony Snicket’s A Series of Unfortunate Events kick-started a tremendous career that has since seen him work on award-winning projects including the music video The Rifle’s Spiral (The Shins); and Alexander Juhasz (Character Designer/Production Designer) who's worked alongside Jamie on numerous animation projects since 2007. Alexander was also responsible for the design of the titular book in the multi-award-winning 2014 Australian horror film The Babadook, directed by Jennifer Kent.
The Little Prince landed on Netflix last week, effectively updating the classic tale through a mix of CG and traditional stop-motion approaches, the latter being responsible for the more direct adaptations of Antoine de Saint-Exupéry’s original story. For us these scenes were the hands-down highlight of the film so it was a real treat to get to speak to everyone at such short notice.
Also in this episode Steve and I discuss our atypical remembrances of reading The Little Prince, less enticing animated Netflix offerings, My Life as a Courgette’s Oscar potential in the Foreign Language category, how The Simpsons lambasting Donald Trump only serves his purposes and Guillermo del Toro’s glorious penchant for death.
You can stream the podcast via Skwigly (and also check out some nice BTS pics courtesy of Corinne) or direct download.
Posted by Struwwelpeter at 14:51