Well, that was unexpected...

So, a bit of surprise news for today - some of you may already know (because, let's be honest, if you've seen me in person over the last seven months I haven't shut up about it) that I was supposed to have a book out in September. As it turns out this is no longer happening...

...Because it's coming out next week! Ta-da! 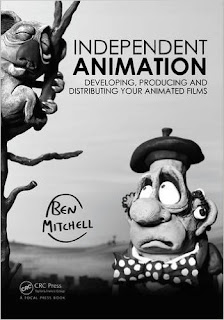 This has been an immense labour of love and in a lot of respects the culmination of several incredibly gratifying years as part of the Skwigly management team. It is about, as the title suggests, independent and auteur animated filmmaking in today's climate, compiling 50+ interviews and a multitude of case studies where artists have relied on, primarily, their own resourcefulness to get their films made, oftentimes pushing several envelopes along the way. Part textbook, part cultural study, my hope is that there's enough here to appeal to both animation enthusiasts and those wishing to take the plunge (or already have and are looking for fresh inspiration for the next project) themselves. As this blog and my work with Skwigly indicates, this is obviously a subject I've been passionate about for a long time and it's driven my own work in many respects. In truth it was writing this book that inspired me to break the dam and finally finish a fourth film that's already paddled its way around the world (with a fifth, 'proper' film already brewing). For their invaluable time, insight, encouragement and overall assistance I want to extend the warmest gratitude to the book's interview subjects Adam Elliot, Signe Baumane, Jeff Chiba Stearns, Ant Blades, Kieran Argo, Bjørn-Erik Aschim, Sam Taylor, Philip Brookes, Elliot Cowan, Emma Burch, Seb Burnett, Joe Wood, Dan Emmerson, Adam Wells, Michael Frei, Robert Morgan, Daniel Greaves, Alex Grigg, Jake Hobbs, Ruth Lingford, Daniel Gray, Melissa Johnson, Robertino Zambrano, Dice Tsutsumi, Robert Kondo, Kirsten Lepore, Aidan McAteer, Tony Johnson, Sam Morrison, Jonti Picking, Bill Plympton, Mike Rauch, Tim Rauch, Doug TenNapel, Nina Paley, Adam Pesapane, Sarah Phelps, Benjamin Arcand, Rosto, Chris Shepherd, Thomas Stellmach, Matthew Walker, Tünde Vollenbroek, Jason Sondhi, Aaron Wood, Andy Martin and Garrett Michael Davis (at this point I'm sure you can appreciate why the working title was Project Group-Hug).
The book also draws on prior Skwigly interviews with Peter Lord, Nick Park, Don Hertzfeldt, Greg McLeod, Steven Woloshen and John Kricfalusi, not to mention how much is owed to those who helped out, primarily my technical editor Katie Steed, the brilliant Corrie Francis Parks (who also recently wrote her own book and played a role in getting the whole project off the ground), Julia Young who lent a helping hand with interview transcripts, Lauren Mattos, Haley Swann, Sean Connelly and the rest of the team at Taylor and Francis. Of course it has to be said that without the tremendous support of a sea of ever-brilliant friends and family it couldn't have come together at all, so a million thanks to all of you who put up with me.
Supplementing the book will be a whole heap of new content that will go online via Skwigly to keep up with the talents involved as well as others cut from a similar cloth, plus special events and other good stuff being cooked up. Be sure to check out the site as well as my Facebook page for future updates.
While I didn't design the front cover myself, here are some mockups I had done around the time of the manuscript submission using images provided by some of the talent involved:
As you can see, the last one is the most similar to the cover image they're going with (see the top of this post) and is from Adam Elliot's first venture into indie territory following such acclaimed work as the Oscar-winning Harvie Krumpet and the gorgeous feature film Mary and Max. Readers of this blog will know I'm a huge Adam Elliot fan and am delighted that the publishers have gone with his work as a cover (it's also fitting as his work, wisdom and creative approaches are perhaps the most prominently featured throughout the book).
The book is currently scheduled for release August 8th (this Monday) and can be pre-ordered now from all reputable retailers, though you're probably best off going through the CRC Press site directly.
Posted by Struwwelpeter at 15:52