Something stinky this way comes... 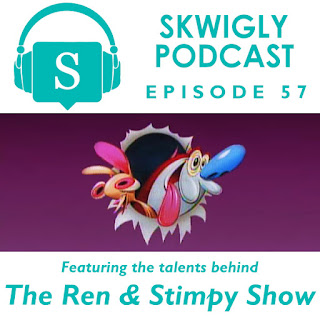 For the latest episode of the Skwigly Animation Podcast I've put together an earnest celebration of the groundbreaking Nicktoon classic The Ren and Stimpy Show which debuted 25 years ago this month. Now enjoying a repeat run as part of Nickelodeon’s The Splat line-up, the series changed the landscape of TV animation forever, paving the way for animated series production to return to its creator and art-driven roots. This is something I've wanted to do for a long time and, while I've certainly never been shy about expressing my love for the show, this anniversary seemed like the most fitting excuse to put together a tribute and try to get some of my absolute favourite people on the horn. Two of the earliest podcast guests were Ren and Stimpy themselves - series creator John Kricfalusi (who played Ren in the first two seasons and the revival series in 2003) and voice performer Billy West, (later of Futurama fame, who played Stimpy throughout the original run and Ren in seasons 3-5) and so I've included snippets of their earlier appearances, but on top of that this episode features brand new interviews with key show talent:
Jim Gomez (Writer/Layout Artist)
Described recently by series co-creator Bob Camp as “the unsung hero of Ren and Stimpy", Jim’s early work on the show involved character creation and layouts before ultimately settling into writing and story. Subsequent to the show Jim has worked in voice directing and The Billy West Podcast which he co-hosts.
Stephen DeStefano (Storyboard/Layout Artist)
Stephen’s work on the series spanned several areas from background design to storyboards and layout. Stephen would work on the show throughout its run, cutting his teeth during the show’s Spumco era, returning during the Games era and as a freelancer for the final season. Since Ren and Stimpy he has worked on productions including Venture Bros, Storycorps, Sym-Bionic Titan, Paul Rudish’s new Mickey Mouse shorts and Genndy Tartakovsky’s Hotel Transylvania 2. He has also been the official artist for Popeye for over 20 years and has worked on some fantastic comics including fellow Ren and Stimpy artist Bill Wray's warped anthology Hellboy Jr and Lucky In Love with George Chieffet .
Bob Jaques (Animation director, Carbunkle Cartoons)
Along with partner Kelly Armstrong, Bob/Carbunkle was responsible for what would undoubtedly be considered some of the first three seasons strongest and most memorable animated sequences. I mean, for chrissakes, look at how great this stuff is:
And while we're at it, check out Kelly's amazing scenes as well:
With a particular gift for timing, Bob has worked on subsequent John K/Spumco productions Boo Boo Runs Wild and the 2003 Ren & Stimpy revival Adult Party Cartoon, as well as more recent productions including Robotboy, The Haunted World of El Superbeasto, Uncle Grandpa and Spongebob.
Also myself and Steve traipse down memory lane happily and joyously as we recall our personal highlights of the show as well as discussing its impact and legacy (Steve also offers up the best theory I've heard thus far for why Cans Without Labels has taken so long). All being well we should be hearing more from the above and other artists on Skwigly in the not-too-distant future, so keep 'em peeled. Other artists to check out who I absolutely would've loved to include but ultimately couldn't for reasons of scheduling, nil web presence or understandable reluctance (the show is one of the most notoriously troubled in TV production history and the word 'traumatised' came up more than once) include Bob Camp, Scott Wills, Lynne Naylor, Chris Reccardi, and the aforementioned Bill Wray among many others.
Stream below, subscribe or direct download:
Special thanks to Thad Komorowski for his advice and assistance in getting this episode together. His book Sick Little Monkeys, a brilliant account of how the show came together and the dramas therein, should have an updated second edition on its way soon, but in the meantime you can have a read of my review of the original.
Posted by Struwwelpeter at 10:49